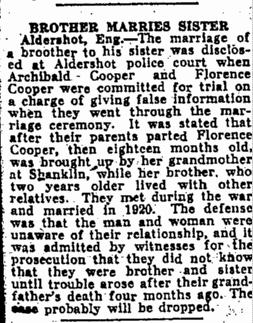 The British North America Act split up jurisdiction over marriage in Canada: The federal government was handed control over marriage and divorce, while provinces were left to handle ceremonies as well as marital property rights, post divorce and remarriage. Officials were wary of the situation playing out in the United States, where marriage and divorce were left entirely up to individual states, resulting in a piecemeal system that allowed bickering couples to cross state lines in pursuit of quickie splits. After Confederation, Canadian newspapers would often set this country apart from the United States by invoking the “morality” of Canadian families, mocking the lax divorce laws of our supposedly more promiscuous neighbours to the south.

“People moved in smaller circles in those days and the range of marriage partners was less extensive,” legal historian Philip Girard said, explaining why a man might want to marry his dead wife’s sister. “Many people thought that this was actually the ideal situation: The deceased wife’s sister would be familiar with the family and she’d already be an aunt of the children.” But it was a touchy idea both for Anglican lawmakers, who considered the setup incestuous, and proto-feminists, who feared it might “complicate and sexualize family relationships, that even when his wife was alive, the husband might already be looking at the sister as a potential replacement,” Girard said. Nonetheless, a Quebec MP appealed to have the laws reformed and, in 1882, husbands whose wives had died were permitted to wed their wives’ sisters. Not surprisingly, the prospect of women marrying their deceased husbands’ brothers was a bridge too far: That remained illegal until 1923.