Elizabeth Lanfear, who wrote Letters to Young Ladies on Their Entrance into the World back in 1824, describes the importance of maintaining social class while choosing a spouse back in the day: “She who weds with one of an inferior rank in life has no right to expect that her friends will associate with her husband, or treat him with that respect which she may think his due.”

Unless a woman takes the offer she gets, Lanfear warns, she might end up poor, alone, and the butt of everyone’s jokes:

“Instead of that attention and consolation which her forlorn situation demands, the finger of scorn is…ever ready to be pointed at the antiquated virgin.”

In his 1918 guidebook, Womanhood and Marriage, Bernarr Macfadden puts the responsibility on women to let their future husbands know if they’d like to retain the rights of their own body, a shockingly new concept for the era, saying that, “It has been for so long a time an accepted idea that the husband’s right over the wife’s body was inherent, it is advisable for any young woman who takes the other point of view to make her attitude thoroughly understood by her future husband before she definitely takes upon herself the obligations of the marriage state.”

It was the luck of the draw, but Lanfear recommended a “fake it til you make it” approach to hopefully hone your hubby into a better spouse:

“By preserving a dignified reserve in conduct, a forbearing silence on the subject of her wrongs…fulfilling as usual the daily routine of Christian and domestic duties, calm and unruffled — she will, at all events, strengthen her own virtues and elevate her own character. By such conduct she will also secure the respect and esteem of all around her, and possibly in time regain the heart of her husband.”

Ladies were considered wise to take the vow to “obey” their husband very seriously back then, as Lanfear says, “A sensible woman, to preserve the peace and secure the affections of her husband, will often sacrifice her own inclinations to his.”

Therese Oneill, author of Unmentionable: The Victorian Lady’s Guide to Sex, Marriage, and Manners, explains how only women of a certain reputation would be seen in makeup and that “nothing would humiliate a man more than for his wife to appear of easy virtue.”

Dr. James Ashton gave a lecture in 1861 emphasizing the importance of eating on schedule saying, “The proper time for sexual indulgence is an important consideration, inasmuch as carelessness in this respect may tend to dyspepsia, indigestion, and other affections of the stomach. Persons who are predisposed to such diseases should never have sexual intercourse just before eating, nor very soon after a full meal.”

Also known as “hysteria,” the so-called affliction descended on women who were apparently too lustful to be satisfied by their husbands, and as Walter Gallichan explains in Sex Knowledge for Men, they should seek treatment from their doctor:

“Every intelligent physician knows that conjugal life is the salvation of many women. Every specialist in the nervous and psychic disorders of women is aware that a healthy vita sexualis is the remedy for many troubles of the brain.”

Men with wandering eyes and other appendages, however, were perfectly free to roam.

As Oneill says, it was considered “in a man’s nature to go searching for a new version of the girl you used to be before you bore him seven children and made the comforts of his home the envy of the neighborhood.”

Which brings me to this display found in the Ottawa Citizen which happened in October of 1867. 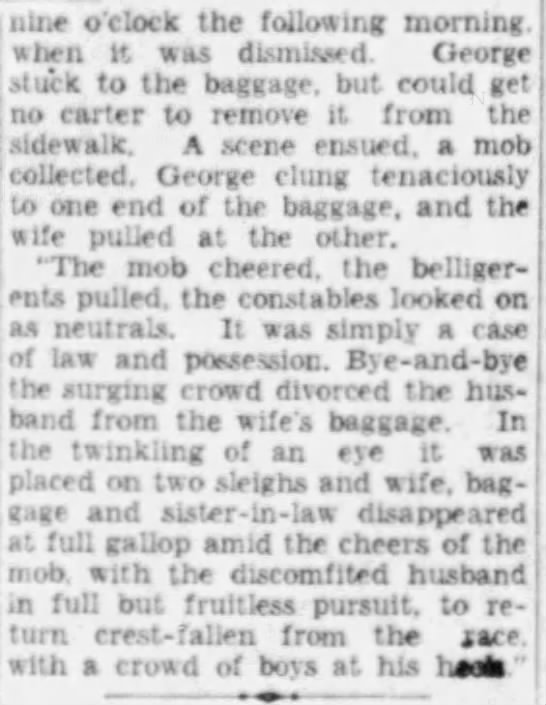