What might have been a fatal accident occurred on Friday night last, on the Franktown Road just southeast of the station. Dr. Hugh McEwen and Mr. P. Patterson were driving towards town, and just as they approached the station and were in the glare cast by the electric lights they were run into by an unknown rig with such force as to completely overturn the doctor’s buggy and throw the occupants many feet onto the hard road.

Mr. Patterson alighted on his feet and at once turned his attention to the doctor, who was lying on his back in the road. Fortunately the latter had no broken bones, although he was stunned by his terrible fall and otherwise bruised and injured to such an extent that he has been confined to his house for the past three days. It is not known who the parties were who ran into the doctor’s rig, but such careless driving should be looked after as the results might have been much more serious than ‘they were.

Mr. C. B. Mansell, dentist, is leaving town to-morrow to take up his future residence in British Columbia, and it is needless to say that he will be followed by the regrets of his numerous friends here, who will one and all be sincerely sorry to loose a kind and courteous friend and good citizen. Mr. Mansell, who is a member of the Methodist church here, was presented to-day with a handsome cold watch by the Epworth League of that denomination.

On Friday last a most exciting game of football took place in Gillies’ Grove, between the home and Perth club, which, owing to the ignorance of the game and rules displayed by the umpire, resulted in a draw. The home team had it all their own way, and only once was their goal threatened, while shot after shot was made on the Perth goal and had it not been for the splendid playing of the Perth goal-keeper, the score for Carleton would have reached well up into double figures. An one occasion without the smallest possible doubt Brown scored for Carleton, putting the ball through neatly, but someone called off-side and then the umpire took up the cry and decided that there was no goal. A little later Carleton again shot and a goal was claimed but disallowed by the umpire. For the Perth men, Latimer and the goal-keeper did good work: and for Carleton Brown. Stuart, McEwan, Donald and the two McLarens kept up their reputation to say nothing of Henry’s grand rushes and good passing.

Next week we will have to give fuller particulars, but to do so now might prove embarrassing. It is reported a certain young man about whose exploits in driving tandem we spoke some time ago, has left town and it is also rumoured that he was some-what hastened in so doing by several young men whose fame for practical joking has a considerable range. What the joke is in this case is only known to the favoured few but they seem to enjoy it very much, probably more so than the innocent, victim. 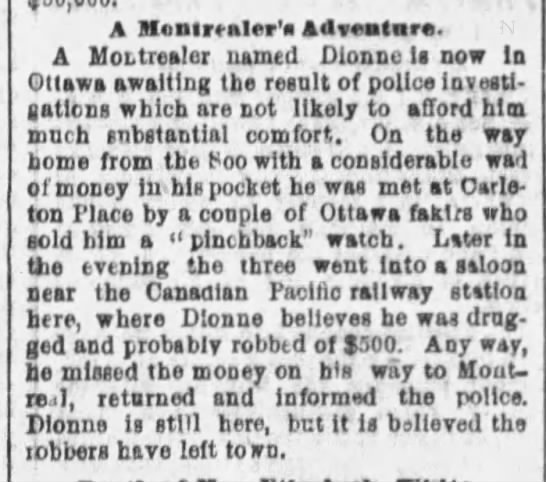