Beginning in the 1880s and through the 1920s, vaudeville was home to more than 25,000 performers, and was the most popular form of entertainment in America. From the local small-town stage to New York’s Palace Theatre, vaudeville was an essential part of every community.

Throughout the 1850s and 60s, variety entertainment became popular among the frontier settlements and urban centres. These shows, intended for all-male audiences, were often obscenely comical. In 1881 Tony Pastor, a ballad and minstrel singer, created a variety show for families. Other managers recognized that a wider audience meant more money and followed his lead. With an influx of recent immigrants and quickly growing urban populations, vaudeville soon became a central point for American cultural life.

There was usually a dozen or more acts in every vaudeville performance. Starting and ending with the weakest, the shows went on for hours. The performances ranged from the truly talented to the simply quirky. There were musicians, such as the piano player Eubie Blake, and the child star, Baby Rose Marie. There were great acts of physical talent; everything from contortionists, to tumblers to dancers such as the Nicholas Brothers. Actors performed plays, magicians put on shows, jugglers juggled, but the real focus of vaudeville was comedy. Great comic acts such as Witt and Berg and Burns and Allen brought in the biggest crowds, but places like Carleton Place never saw them.

Once an act worked, performers repeated it in front of audience after audience. Many performers became known simply by their signature act. With the advent of the radio, however, America found a free and easy way to tap into that variety of entertainment they had looked for in vaudeville. With such specialized skills, the performers continued to perform to smaller and smaller crowds. In time, theatres began to show films, and the few vaudevillians left took what work they could get performing between reels.

Small time circuits booked performers in the smaller, less prestigious theatres and also played in small rural towns. As you would expect, it paid less. They booked performers for half a week rather than a whole week or several weeks, meaning performers had to spend two (unpaid) days each week travelling to the next town rather than one. But the distances, or “jumps,” were shorter, so travel cost less. So did small town boarding houses or hotels. And in smaller venues performers could get by with cheaper costumes and scenery since audiences were less sophisticated. Vaudeville was tough, but playing in small towns in Lanark County was pretty grim.

If you had the right stuff, you picked up the dance steps, the vocal style, the comic timing that could make you a star—maybe even one of the Marx Brothers. No wonder their mother, Minnie, loved vaudeville. And millions of fans and thousands of performers agreed.

There was the brilliant blind and deaf Helen Keller, who did nothing but answer a few questions written into her palm; the saloon-smashing prohibitionist Carrie Nation; and the silent but scandalous “girl on the red velvet swing,” Evelyn Nesbitt, whose husband, drug-addicted socialite Harry K. Thaw, had murdered her former lover, the world-renowned architect Stanford White (audiences happily paid good money for a glimpse of the first twentieth-century sex kitten).

The finale was for acts on the way down. By now patrons were donning coats, chatting, and heading for the aisles. If they bothered to turn around, they saw a monotonous singer, a cacophonous one-man band, a juggler of little note. Occasionally, these bookings surprised. The Cherry Sisters were so inept that they won a pre-camp eminence. Ranging in number from two to five, the group sang off-key and had such bad timing that audiences threw vegetables at them: an enterprising manager began to sell produce outside the theatre.

The Temple of Fame

The Temple of Fame, a stage play featuring monologues from women throughout history, all vying for a place in a pantheon of goddesses. Showcasing the acting prowess of many of  local leading society lights, it was first mounted in 1900 and, with a few minor tweaks, mounted in 1918 for the Red Cross Auxiliary. The original script for The Temple of Fame sees women, through a series of monologues, plead their respective cases to the Goddess on why they should be “crowned” with fame and elevated to the temple. 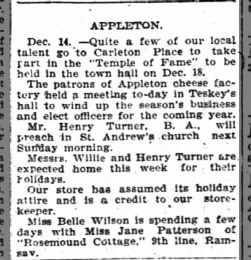 In 1897 at the Opera House of the Chatterton House Hotel in Carleton Place, life was not much different than any other theatre pit. Kindred attractions may be remembered as of the prevailing taste of our play goers. An interesting diversion of the theatre seating pit would be tossing. A boy on the back bench would say:”Toss Me,” and two or three of his companions would pick him up and swing him over the heads of those in front. The latter, whose heads he had landed upon would forward him with another swing, and, finally he would arrive at the front bench, where he was privileged to stay as a reward for the hardships of his flight. Small town newspaper editors were very unhappy with the theatre going behaviour of some sections of the audience. Some young men sat at the back and heckled the entertainers and shouting and whistling through out the show.

Lewis and Wardrobe Hippolympian appeared many times at The Chatterton House Hotel.  They performed songs and choruses, acrobatic and gymnastic feats, contortions etc. The Carleton Place Herald reported that Lewis and Wardrobe also  formed themselves into a brass band and performed in the town streets wherever they went. Nothing but talented, unique, and beautiful people.

Photos from The Carleton Place and Beckwith Heritage Museum

And So They Danced in Carleton Place

The Story of Ms. Kitty Marks