Hugh THURLOW arrived at Lavant Twp. with his wife, Ann CHRISTLOW, and young family in 1856 from Westport, North Crosby Twp., Leeds Co. His farmstead was located on Lot 11, Concession 3, of Lavant Twp, and contained two hundred acres. Hugh was the son of George THURLOW and Mary BALLANTYNE of Westport. Hugh was born about 1828. Hugh was a Farmer and Yeoman. Hugh’s first wife, Ann, was born about 1829 in Scotland. They married at Westport on 22 Dec 1847. Their first 4 children were born at Westport. They had another 7 children born at Lavant Twp. Ann died some time between 1871 and 1874.

Hugh married secondly to Jane McINNESS, daughter of Edward McINNESS and Janet BAIRD , on 16 Jun 1874 at Middleville. Jane was born about 1849 in Lanark Twp. Hugh and Jane had 5 children together, all born at Lavant Twp.. Jane died between 1881 and 1886.

Hugh married a third time to the widow Mrs. Caroline VICE (or VOICE), daughter of Israel and Isabella BOLTON, on 8 Oct 1886 at Lavant. Caroline was born 22 Sep 1846 at Carlton Place. Together, Hugh and Caroline had two more children. Caroline had at least 3 more children from her previous marriage.

Hugh died at the age of 65 of heart failure on 20 Jun 1892 at Lavant Twp.. He was buried on his farm. After Hugh’s death his farm and land in Lavant was sold
off and the proceeds distribute to Caroline and his children. Hugh was the father of 17 children all but two of whom survived to adult hood. Most of
Hugh’s children by his first marriage moved to Michigan where many their descendants still live today. Other descendants remain today in the eastern
Ontario region. 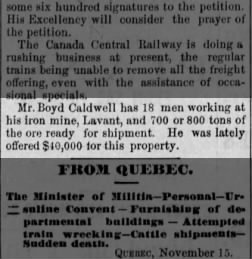 The Gazette
Montreal, Quebec, Quebec, Canada
Tue, Nov 16, 1880 · Page 1
Died in the Asylum—Mrs. Sarah Horn, wife of Mr. James Horn of Lavant Township, died at Kingston at the asylum on the 13th inst., where she had been taken a few months ago.