It’s true the giant Rosamond Woollen Mill today looks cold and depressing as a penitentiary as the surging waters of the Mississippi rush uselessly by. There may be two or three men inside the huge rambling structure but that’s all. No longer does the big stone building vibrate as expensive weaving machines turn out warm blankets and heavy fabric. Several other mills in town are in exactly the same plight. No orders, no work and people at home idle.

Skilled textile workers, out of a job and hopeful that the mills will reopen before they maybe forced to look elsewhere for work that is strange to them. But there’s one busy little plant, situated on the main street, right smack in the heart of the town, that’s humming with activity. It’s the Hartley Woollen Mill where over 50 men and women work two shifts to fill an order for nearly 100.000 blankets for Canada’s armed forces. Its owner, Lewis Maldaver, new here from Halifax, commutes from Ottawa and the mill superintendent. Dick Wilkins, goes home weekends to Toronto. 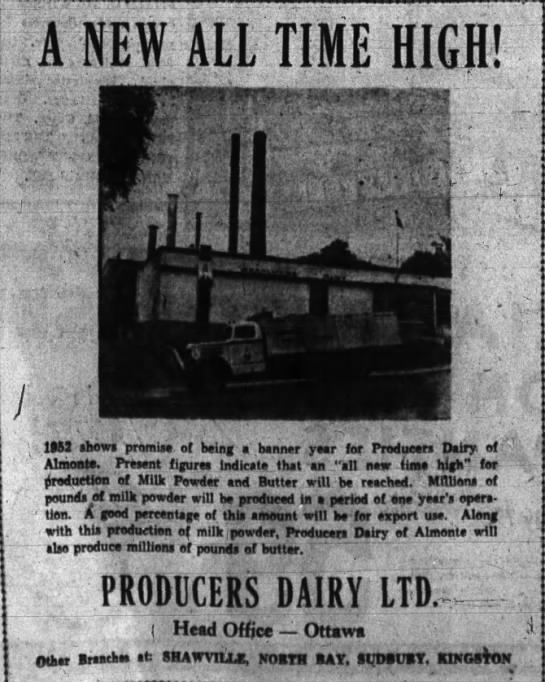 And if you’re up around the Producers’ Dairy plant, a new industry in Almonte, you see the place surrounded by the firm’s trucks, being unloaded of cans of milk gathered from the rich agricultural area surrounding Almonte. Inside. 60 people are busy turning the white fluid into butter and powdered milk that goes to Ottawa and to all corners of the globe.

On Almonte’s main street is the home of Peterson’s famous ice cream. No talk of unemployment here. And so it is at the Almonte Flour Mills, formerly “Wylies” for a good many years. Here you see farmers bring their golden grain and wait while it’s turned to flour and other by-products of the wheat they raised on the north quarter or the back 80 acres.

Almonte is also the modest source of Mack’s No Rub, washday friend of many a thrifty Canadian housewife. Who’s “Mac?” He’s John D. MacCallum who could tell you some interesting facts about the town’s popular lawn bowling green. Almonte is proud of its efficient house of mercy, the Rosamond Memorial Hospital, endowed long ago by the famous miller and members of his family, the latest gift coming from Mrs. Alex Rosamond.

Almonte’s twice- enlarged high school that turned out such renowned men as Naismith, McKenzie, Bell, Munro and Peacock, is busy hammering brains into other aspirants to the field of commerce, industry, finance and professional careers. Some day principal W. Frank Thorn will be proud of his more promising students of today. Grooming pupils for the high school is public school principal E, H. Farnham also addressed as Capt. Farnham on drill nights at the “C” Company quarters of Ottawa’s Princess Louise Dragoon Guards in Almonte.

For the last 92 years, the people of Almonte and district have exhibited their finest livestock, farm and home produce at the Almonte Fair staged by the North Lanark Agricultural Society. This year the president is Howard Sadler, assisted by secretary Howard Giles in that office for many years.

The townspeople turn out for hockey games played in the huge community centre and skating rink, situated on a 98-acre park willed by the late Winnifred K. Gemmill, descendant of one of the settlement’s earliest pioneers, John Gemmill.

The Brockville and Ottawa Railway, now the CPR, came through Almonte about 1860; the Town Hall large as the one in Hull was built in 1885 and lighted by lamps until the first electricity got past the street light stage in 1900. It was a great day in Almonte when in 1932 the citizens turned on their water taps for the first time. From several artesian wells, one of them a flowing spring, comes what natives claim is the finest water in the world — no chlorine and no shortage.

Fire Chief Durward Washburn is backed up by an efficient volunteer fire brigade and a brand new combination pumper truck that cost $13,000. The town is policed by the Ontario Provincials with Constables M. A. McNairn and William Wilson stationed in town and two patrolmen on Highways 29 and 40.

James Savage is registrar in charge of the historic North Lanark Registry Office in Almonte. The town has two banks, the Royal managed by W. L. I Shaver, and the Montreal, with Clark Gourley as manager.

Town undertakers, both of whom have been mayor of Almonte and county warden, are George Comba and E. W. Scott. Dr. J. K. Kelly, the town’s beloved physician, recently retired after over 50 years practice. Dr. J. F. Dunn, Dr. R. H. Cole and Dr. Metcalf are Almonte’s medical men; lone dentist is Dr. B. W. Pickering and “the vet” is Dr. A. F. Wierneck, Polish newcomer to Almonte. Legal matters in Almonte are handled by three lawyers, Percy Gregg, R. A. Jamieson and James Newton. One of the town’s greatest boosters is M. P. Coderre who runs a grocery store opposite the Town Hall.

One day back in 1945 “Mickey” as the boys call him, put Almonte on the map when he Induced CBC commentator John Fisher to visit Almonte and then do a 15-minute broadcast on the town. Referring to General Almonte who unwittingly gave his name to the early settlement in 1885, John Fisher said if the general could visit Almonte, “The General Would be Pleased.”

Well, Almonte still has that picturesque old world beauty that charmed John Fisher in 1945. But in view of the town’s present adversity, one cannot help think that if the noted narrator were to do another broadcast he might have to change his title to “Would the General be Pleased.”

Kerry’s and the Pharmacy, an 1883 building, once owned by members of the Shipman founding family. Pinecraft, on the corner, occupies this part of the original Rosamund Mill complex dating to 1862. Its 5-sided rugged stone design set the early building fashion here, as was followed by the 1863 structure across from it. On the way out of Almonte, you might like to stop for refreshment or a meal at Mama’s Place, a roadside steak house and tavern.

For many years, this “sturdy stone structure was occupied by the Royal Bank. Now it is the the Almonte branch Canadian Legion–No. 240.

Scrapbook Clippings of the Closing of Zephyr Textiles

Almonte in the Twenties