Son of a Mexican desperado, the 25-year-old Peg Leg Brown was so named after losing his leg while trying to hop a train.

After being convicted of burglary and sent to jail in Texas, he escaped and hopped several trains, eventually making it to London on June 24, 1898.

Events led him to knocking a railway guard unconscious and fatally shooting London police Const. Michael Toohey in the stomach. 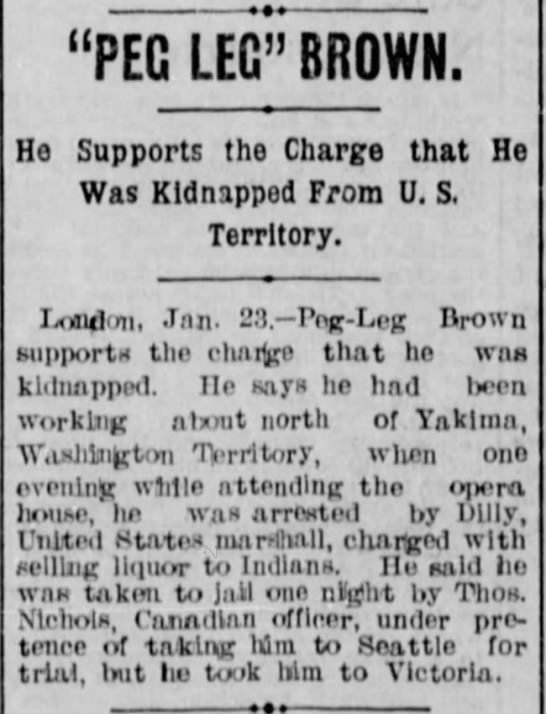 A continent-wide manhunt ensued and after a second gun battle near Watford, a United States marshall caught Brown in a Washington State opera house.


He was brought back to London, found guilty of Toohey’s murder and sentenced to hang May 17, 1899.

Brown was laid to rest in the city’s jail yard. His remains were uncovered in 1985 by a backhoe operator, removed and now rest at Western University.

The “Curse” of Peg Leg Brown
by Christopher Doty

A native of San Saba, Texas, Marian (Peg Leg) Brown was the son of a Mexican desperado. The 25-year-old roughneck had lost his left limb while attempting to hop a train.

The spring of 1898 found Brown in a Texas jail for burglary. In June he managed to crash out, taking a .44 caliber revolver with him. The gun contained six bullets. Brown would use all of them before the month was over.

After escaping from a gun battle in Texas, Brown hopped a series of freight trains until he arrived in London, Ontario on the evening of June 24. After striking a railway guard unconscious, Brown was approached by Constable Michael Toohey who attempted to arrest him for assault.

After a continent-wide manhunt and a second gun battle near Watford, Ontario, Brown was apprehend by a United States Marshall in a Washington State Opera House. Brown was brought back to London where he was found guilty of Toohey’s murder. He was sentenced to hang on May 17, 1899.

During the following two months Brown experienced a death bed conversion to Christianity. He read the Bible regularly, sang hymns and struck up a friendship with Rev. Dr. Johnston, pastor of St. Andrew’s Presbyterian Church. Johnston, believing Brown innocent, traveled to Ottawa a few days before the execution in an attempt to have the conviction appealed by the Governor General and the Prime Minister Laurier.

But no appeal came. Johnson and a small groups of officials accompanied Brown to the scaffold at the appointed hour. A massive crowd had gathered around the London jail yard, even though their view of the hanging had been deliberately blocked by siding.

“Brown’s face wore a calm expression, ” wrote a local reporter. “He was pale in the presence of death but fully resigned…There was none of the spirit of bravado in the condemned man’s look.”

At exactly 30 seconds past 8 a.m. the hangman released the trap, sending Brown to eternity.

As the wind picked up and a storm mounted, Rev. Johnston spread his arms and yelled to the crowd “Oh God, forgive us. Oh God, forgive our country.” A bolt of lightning and a crack of thunder punctuated Johnston’s outburst as he wept uncontrollably.

In the end Marion “Peg-Leg” Brown was convicted of murder. As he was led away to the gallows, he prophesied: “Another innocent man has been convicted. The fact that no grass shall form on my grave shall prove my innocence.”

At this pronouncement, a lightning bolt struck the courthouse.

Brown, minus his wooden leg, was buried in an unmarked grave in the jail yard, the last executed convict to suffer that fate.

Over the years attempts to graft a ghost story on to the legend of Peg Leg Brown have been, at best, strained. Brown apparently predicted no grass would ever grow over his grave. While partially true, this was due more to the quicklime used to decompose his body rather than any ghostly intervention.

A second, more preposterous story, has it that the shadow of Brown’s lifeless body can be seen swinging on the jail house wall on the anniversary of his execution. The story lacks any first hand accounts.

A third and final yarn was likely concocted by jail guards to frighten prisoners and impress visitors. It’s said that Brown will not rest until the jail is quiet every night. It’s likely this gave pranksters an excuse to put on Brown’s wooden leg (now on display at the Forks of the Thames Museum Centre) and stomp around the jail house. It was said that in April of 1899 a *Carleton Place man with a penchant for curios, has already made an offer for the artificial pedal extremity of “Peg-Leg” Brown, the negro tramp, convicted of the murder of Policeman Twohey of London, Ontario. Could that person be the notorious Dr. Howard of Carleton Place?

One thing is for certain, Peg Leg did not lie easily in his grave. In May of 1985 a backhoe operator uncovered Brown’s skeleton, minus the upper torso which had been neatly severed by the machine.

“They should have known better,” fumed local historian Orlo Miller. “I told them and others that there were bodies buried there.”

A missing left leg made it clear whose body it was. Archeologists were sent to comb over the earth that had been removed for subdivision landfill but could only find fragments of the upper skeleton. The surviving bones were later removed to the University of Western Ontario for study, where they remain to this day.

As for Peg Leg’s former resting place, it was paved over with asphalt – finally realizing the “curse” that no grass would ever grow over his grave.

History has proved Peg-Leg’s prediction true. In 1985, his unmarked grave was dug up from under the tarmac of the Middlesex County House parking lot. It had been graveled for years. Peg-Leg’s ghost is said to haunt the halls and passageway of the building too. Especially on the anniversary of his sentencing. May 11, 1899.

As always, fact is stranger than fiction.

Mother Barnes and the Missing Money of South March

The Man of the Walking Dead of Maberly

Local Man’s Dad Was Leader of The Stopwatch Gang

Missing You.. 44 Years Ago in Carleton Place