My childhood friend Sheila Wallet Needham sent me this photo of me in the 70s when I had one of my favourite hairstyles. We called it a Wedge, but much as I could search I found nothing. Until– I found the Stack Perm, or as it was called The Disco Wedge.

The stack perm, also known as the disco wedge, was a new trend in permanents that took the dance floor by storm. Hair designer Dwight Miller created this disco diva look that was a crimped variation on the sweet wedge style that Dorothy Hamill popularized. 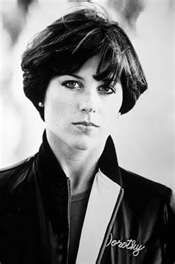 Gilda Radner’s Saturday Night Live character ‘Roseanne Roseannadanna’ was most memorable for her frizzy fro cropped straight across the bottom at chin level, with a blunt cut of bangs straight across the forehead. Looking at this photo I thought my disco wedge was a lot bigger than the photos– more like Gilda Radner’s or the other photo. Unfortunately, I don’t know what I was thinking LOL….

Another style I wore in the 1970s, courtesy of a Rideau Street salon.

Then there was this style courtesy of a salon in Los Angeles.

Wanda Jane who had the same hairdo and hairdresser, Sharon, but her Wedge looks a lot better and bigger than mine. Her dress Flash Cadilac

Should Girls Speak to Strange Men in Uniform? 1917

The Best Little Chin Hair Post on the Prairie

Lois Lyman–A Hair of a Blunder!