We love getting stories and photos please send them in. Thanks to Allan Stanley we now have a complete bio on  Mary Bell-Eastlake.

Here is the info I have put together for Mary Bell-Eastlake. The bio is quite long and you may feel you need to edit it. However, it is important to know that some of her work is in the permanent Canadian collection at the National Gallery in Ottawa. That is how we came to know her from the Canadian 150 show at the gallery and with a little research came cross 2 paintings of Almonte from early in the 20th century. The one I was most interested in is called “Moonrise” which after close inspection reminded me of the view across “The Bay” to Almonte’s “New England”.

So going back and forth to the Almonte photo archive website I found a postcard with the same view… the side-by-side example is what I have also included here. The photo below “Moonrise” is of the Rosamond mill from 1925 and was sold recently at auction for over $4,000 Cdn.
Hope this info can be of some interest to you. I have some personal interest in that my father was born up on the hill in “Moonrise” about the same time as the painting was created.
Cheers, Allan

After I sent that off to you I was curious as to her death… Almonte or Ottawa? Well, at least I know where she is buried… at the Auld Kirk cemetery. See photo and link below.

Mary Eastlake was born in Douglas, Ontario in 1864. She studied in Montréal with Robert Harris, in New York at the Art Students League with William Chase in 1885, and at the Académie Colarossi.

She worked with oil and pastels, her subject matter often landscapes and portraits, especially including children.

In 1886 she was commissioned to paint a number of works for American patrons in New York. She traveled to France and England in 1890 and to Paris in 1891.

She became a member of the staff of Victoria School of Art, Montréal, in 1892.

In the early 1890’s she lived briefly in Almonte, Ontario. She later moved to England and settled in St. Ives, where she met and married the English painter Charles H. Eastlake. Wither her husband, they created jewelley enamels.

Throughout her life she traveled extensively in Europe and Asia. In 1939 the couple returned to Montréal and then Almonte, Ontario.

She became a member of the Royal Canadian Academy in 1893 but resigned following her marriage. She was also a member of the Pastel Society of London, The Women’s International Art Club, and the Boston Water-Colour Society.

She exhibited with the Art Association of Montreal from 1888-1943, with the Ontario Society of Artists in 1892, The Royal Canadian Academy from 1887-1943, The Toronto Industrial Exhibition in 1894, The Royal Institute of Painters in Oil, The London Pastel Society and also in Buffalo, Boston among others. 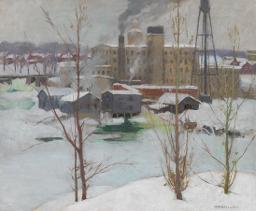 the mill by mary bell eastlake 1925

4 hours
Many thanks for putting together this remembrance of Mary A Bell Eastlake. It is only in recent years that many of these talented women artists have finally been recognised, Emily Carr and a few others apart. When we were married many moons ago my wife and I received a watercolour as a gift from a family member by Charles Herbert Eastlake which we have always treasured. Vera Bell, James Mackintosh Bell’s wife, came to our wedding actually. A New Zealander by birth and upbringing, she was the sister of Katherine Mansfield, the poet and staple of every school’s poetry lessons in years gone by, who died tragically young. They had met when ‘Mac’ Bell was head of the Geological Survey of New Zealand; it was fascinating to see his published Will. I think his money came from shares in the famous Pine Point mine on Great Slave Lake which he had a hand in discovering. He often travelled in the north country with AY Jackson and Dr Frederick Banting. He left several published books including those on his travels through Russia to Siberia during the First World War, as well as on New Zealand and other far flung places. He was asked by Robert Falcon Scott to accompany him on the final expedition to the South Pole in 1910. Of course no one came back from that and I guess he was probably relieved later that the New Zealand government would not release him from his duties to go. A fascinating family the Bell’s and it is well worth a visit to the Auld Kirk cemetery to see their simple plot on the edge of the ravine that runs to the river below.