Thanks to John Hudson
Hi Linda,
John again. I am looking for information on the Almonte Bombers Hockey Team in the early 1950 who played out the rink built around 1948. When I was young the rink on the Island was condemned, a small rink was built on the town hall lawn and then another open air rink in Gemmill Park. Then later the barn rink built on the existing arena and curling rink site.
The Bombers were mostly from Ottawa, Little Italy. Santo Imbessi, Rocky Rockburn, Fred Hughes, Ivan McAuliffee (from Almonte). I think there were a couple players from R.C.A.F. Team that won the Olympics. I think they lasted about five years. The Almonte Bombers were a senior team that played in the Rideau Group in 1950-51.

Tom Miller--I was remembering the Almonte Bombers from the 1950/1951 season. They played against Smith Falls, Perth, Carleton Place, Renfrew and Arnprior. I believe that most of the players were from Ottawa. Some of the last names that I remember were: Hughes, Dinardo, Schroader and Lombardo. Does anyone have any memories of this team, were there any Almonte players?

What was the logo and team colours?

Do you remember any of the other players?

The team played there home games at the old rink. My father ran the concession stand for a few years,his name was Bill Miller. My brother Terry and Donnie Peterson used to clean the ice during the first and second period. Any one have a few memories of this Almonte Team? 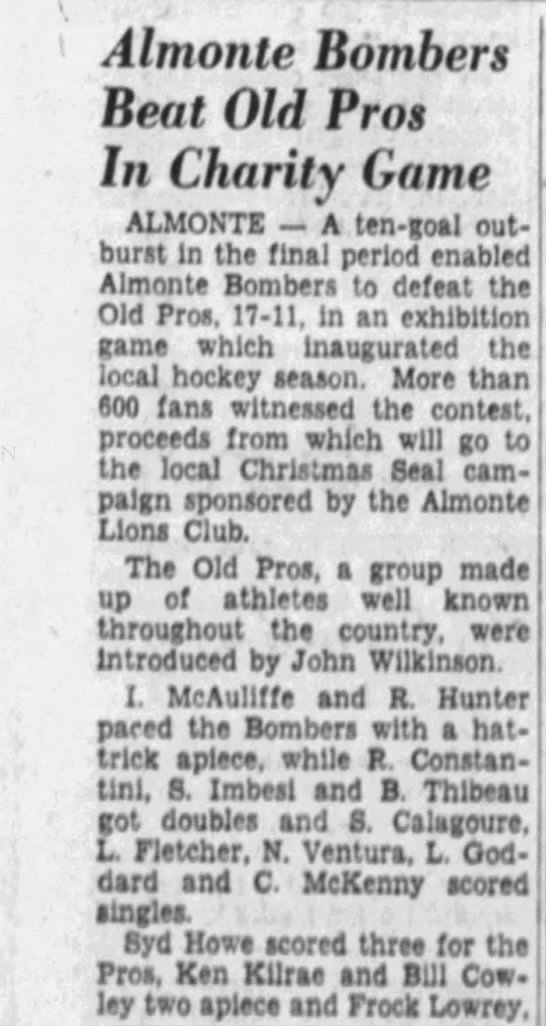 Sandy France Hey Tom. The Bomber uniforms were copied from the New York Rangers, (blue with red and white trim). Some of the players I remember were R. Kritsch goal, Santo Imbesi, Rudy Cosantini, Norm Ventura, Archie Creighton, Ivan McAuliffe. Reg Schroeder had played on the 1948 RCAF Flyer Olympic Championship team. As I recall, your father played goal for the wartime version of that team, along with Hall of Famers Milt Schmidt, Bobby Bauer and Woody Dumart. Nobody from Almonte on the Bombers team. A couple of years later, they wore Boston Bruin type uniforms and 3 Almonte boys were on the team, Jack Peterson, Mack Edmonds and Torchy Burns. Along with Harold Woermke, I helped run the scoreboard for those games. In the 60’s I played golf with Norm Ventura and worked at the Civic Hospital with Archie Creighton. Pretty sure Archie had played with the Ottawa Senators in the 40’s.

Your Almonte Hockey Team Champions–Who do you Know?

The Almonte Skating Rink on “The Island”

So What Did You Wear Ice Skating?

Skaters Under Ice? Ring That Bell!

Falling Through the Ice- One Reason Indoor Rinks Were Created