There was just something with a photo that Jane Stewart sent me this week. She sent me a photo of her father Gerald Poaps, the late husband of Lucy Connelly Poaps, whose scrapbook photos we are all enjoying. Well, I lost the photo once, and asked her to resend it, and then didn’t I lose it again. As much as I searched through my email I could not find it — so what was up?

It is no secret that father of Susan, Sandra and Steven Poaps, stepfather of Robert, Lee, Jane and Eric Stewart became a published author in his 91st year. Mr. Poaps also contributed to the rise of high-technology began during the Second World War (RADAR), continued through the Cold War (DEW Line) and into the early 1970’s with Canada’s space program. Mr. Poaps was part of the Polar Continental Shelf Project having been seconded by the National Research Council from the DRTE.

Gerald E. Poaps left the Royal Canadian Air Force in 1947 and became the ninth member of the Radio Propagation Laboratory, which was housed with the Royal Canadian Navy in the old A Building on Elgin Street in Ottawa. He has loaned us a collection of photographs which he made during his career with the DRB, DRTE and CRC, and we are showing a few of these photographs to indicate to others the types of equipment worked on and developed through his career, and the types of projects undertaken. Gerald retired from CRC in 1975.

Here is the note we received from Gerald in April 2002:

“I joined DRTE Radio Physics laboratory on December 10 1948. The group of nine personnel consisted of the following staff: Frank Davies, Rita Richard, Jim Scott, Jim Cox, Amour Warwick, Clair McKerrow, Jim Scott’s analyst named Dave – I can’t remember his last name, and the machinist named McQueen. Six of us had office space in the Armed Forces Headquarters Building A on Elgin Street Ottawa. Warwick, McKerrow, and McQueen were located in the machine shop building located on the Rideau River near the arboretum. About 1950 a small building was constructed beside the machine shop and the Radio Physics staff moved in. I have a photograph of the building taken in 1951. At this period in time, additional staff were employed. To name a few: Jack Meek, Dr. Percy Field, Marion Phillips, Ms. Fowler, Everett Stevens. An early phone book would provide a complete listing. I believe that I, at 87, am the oldest living member of the original RPL staff.” You can read more about Gerald here..

So if one had to speak outright we could say that Gerald Poaps was a no nonsense smart individual, and maybe he looked down on the earth below and saw this flighty woman named Linda Seccaspina about to document some of his achievements. He probably turned to my late Dad, Arthur J. Knight and said,” Nope, better move along!” LOL It seems to be the only thing I can come up with just at this second, but I am carrying on. I have the photo now!

Here is one of the stories: Gerald Pope and his 1812 Box 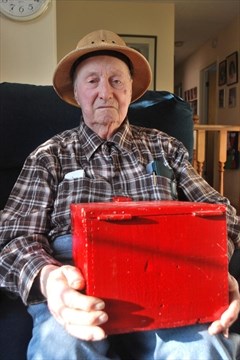 Gerald Poaps, 95, of Almonte, holds a red box, a treasured family heirloom, which belonged to his grandfather, who fought for the British in the War of 1812. –

Article and Photo above by Desmond Devoy

ALMONTE – When America and Canada mark the War of 1812 next year, Gerald Poaps won’t have to go to a museum to see history retold.

He has a piece of history from that war in his hall closet.

Not only that, it’s even more valuable to him as a family heirloom.

The 95-year-old possess one of the few items in his home that is older than himself, a 199-year-old red wooden box that was owned by his grandfather.

“That was issued to him by the redcoats (British) during the War of 1812,” Poaps said. “It contained the loading tools for the gun of the day. It was handed down to my father from his father.”

While other soldiers had their own tasks at the front, Poaps had his own special duty that kept his brothers in arms well armed.

“He was in the front lines, but he had a special job making ammunition for the rifle of the day,” said Poaps. “That little red box has been used for keeping special things in.”

However, Poaps was not especially close with his grandfather.

“My grandfather, I only saw him once, going by on a bicycle,” said Poaps of John Paul Poaps, who is now buried in an unmarked grave near Vars. “We didn’t visit around like they do today. Things were so different in those days.”

He is uncertain why his family was estranged from his grandfather.

Update--When I called Lucy Connelly Poaps a few weeks ago she assured me that the box was still safe with family.

Left to right – our Uncle Eric, Aunt Ella and my Dad, Gerry Poaps. Me in front of Uncle Eric and Rob in front of Aunt Ella. Taken at our home in Ramsayville, Ontario in 1960 — Jane Stewart

Hello Linda – did my Mom tell you that my Dad wrote a book, Memories of Leonard and Other Recollections? It was published in 2002. Here’s the photo of my Dad, Gerry Poaps, at the celebration for his book release.  (Author’s Note- This is the photo that kept disapearing:)

He autographed my copy, makes me smile! Jane Stewart

An excellent reference for those interested in the families, businesses and public institutions that comprised Leonard, Ontario in days gone by. Written by Gerald E. Poaps and published by the Society in 2002. (ISBN 0-9687196-1-9). Cost: $15.00 including postage. Click here

Apologies to the family– this is all I could find.:(

His son, Steven Poaps, Engineer, Defence Construction Canada, is currently de-commissioning the DEW Line in Canada’s far north, the very installations built in part by his father during the Cold WarFollow the following URL for a walk through some of Canada’s amazing history