Linda and Unknown Neighbour whose wry smile seems to suggests he knows about everything going on.- Albert Street, Cowansville, Quebec 1950s

The other day I realized all those myths we were told as children are finally not around anymore, and if they are, they are few and far between. One of them was a scenario I still remember like yesterday.  It involved my friend Cindy who used to come down from Montreal like clockwork once a month to visit her godmother Joan on Albert Street in Cowansville.

During those days she visited we used to go swimming at the town swimming pool every afternoon. Without fail, we were in that water at 1:00 and stay there until 4:00. We really didn’t swim a whole lot, but jumped in and out of the pool feeling the chlorine stinging our eyes and trying to avoid the local bully who used to cannonball everyone. We would sit and eat pop rocks and drink soda pop defying the rumours that Mikey, from the LIFE Cereal commercials had died doing the same thing. That had to be another myth or rumour right?

Enjoying our afternoon swim one day her godmother Joan, and my mother were suddenly seen standing at the edge of the pool wringing their hands and looking like someone had died. Cindy was wrenched out of the pool and whisked away, and was never seen again. Being extremely concerned I often  asked what happened to Cindy, and no one would tell me. It was like Russian spies had whisked her off the face of the earth, and it was only years later I found out that Cindy had gotten her first period. Of course in those days it was considered “the curse” and of great concern to all mankind. May we not forget to mention that after that day Cindy probably followed 40 years of  inconvenience, aggravation, and suffering. 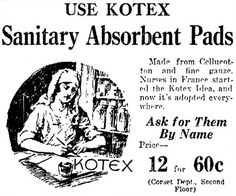 I am sure that some of you can remember during that era there was no swimming, no moving, no smiling, no nothing, and NO ONE dared speak about it. Strange pieces of white elastic and HUGE blue boxes with the word ‘Kotex’, were hidden in the back of linen closets everywhere, and I had personally seen them mixed in with the family heirloom doilies.

My grandmother stopped baking bread and making jam when it was her time of the month, or ‘the curse’ as she called it. Bread according to Mary Louise Deller Knight would not rise, and jam would not thicken, so the kitchen almost shut down once a month. Her friends talked about it often around tea time at least once a week while sipping hot tea out of small fancy teacups, eating raspberry scones and sharing diet tips.

Eventually I finally heard it was nothing but an old wives tales, and a bad one at that. Slowly I began to debunk the myths buried in my mind from the years of terror. I was relieved to know that when I finally died the coroners would not find that probable 10 pound ball of chewing gum in my stomach. Maybe that’s where all this extra weight I carry around comes from. It is probably just from the 60 years plus ball of chewing gum sitting in there. Okay, maybe not, but even after all these years the myth carries on and still scares me. Note to self –get rid of the one too many myth tabs that continue to circulate my brain– or maybe not, information can be beautiful.