Thanks Johnny Racine for these great photos you found on Lost Ottawa–Anyone know about this business?  Well Jeff Brennan did, and found the following on Old Time Trains–

Stories of the Local Lime Kilns as Printed in the Eganville Leader
From “Reflections of a Century: Stories and Photos from the Ottawa Valley”, published July 2002) and now we know the rest of the story– or hope we do.

Did you know that in November of 1981 Carleton Place police put the town’s three elementary schools on the alert after 600 dynamite blasting caps were stolen from the office of a vacant lime-kiln processing plant. Police said they believe the blasting caps, which are used to detonate dynamite and have enough explosive power to cause serious injury, were taken from the office of the closed-down factory Sunday night or Monday morning.

Constable Terry Williams, who was heading the investigation, said he believes the theft was the work of students because the factory yard on Napoleon Street is used regularly as a shortcut to three schools in the vicinity. He said the thieves broke into the locked office after entering the factory and then smashed open the padlock of a strongbox that contained the devices.

“They took what they could carry,” Williams said, adding some caps were left behind. Williams could not say why the blasting caps were still stored in the vacant plant, which operated under the name of Carleton Place Lime Products until it closed about 10 years ago. But Williams said police were looking into that aspect of the investigation.

The owner of the property, whom Williams would not identify, apparently discovered the break-in after one of his routine checks of the building early Monday afternoon. “He lives just down the street and checks the place from time to time,” he said. “The last time he was there was Sunday and he hadn’t noticed anything.” Police notified officials from Carambeck Public School, Caldwell Public School and St. Mary’s Separate School of the missing caps. Williams said anyone who comes across the caps should immediately notify Carleton Place police at 257-2323.

The History of the Lime Company

June 21 1957
Shane Lime Works Change Ownership
The Shane Lime and Charcoal Company of Eganville have disposed of their interest at their Fourth Chute Plant. On Saturday, June 15, the Carleton Lime Co. of Carleton Place assumed new management. Their representative is Mr. S.J. Neilson. Mr. W.J. Shane will continue in charge of the plant and his brother, Mr. Douglas Shane, will be associated with him.

This plant, which has been known as Shane’s Lime Kiln, was originally formed by the Standard Chemical Co. of Toronto in 1913, and was located just below the village limits, with the late John Shane as foreman. In 1923, Mr. Shane and his sons acquired all the interests. They also owned the Charcoal Plant at Keamey, which was dismantled in 1943.
For 34 years the plant has been in operation, employing 17 men or more, and running two or three kilns to keep up with the ever-increasing orders. When the deposit of limestone became exhausted at Eganville, the Shanes acquired the splendid layout of the Dominion Rock Products, halfway between Eganville and Fourth Chute, acquiring also an almost inexhaustible supply of rock, sufficient to guarantee the continuity of operations for years.

March 11–1960
W. J. Shane Retires From Bonnechere Lime
Mr. S. J. Neilson, president of Bonnechere Lime Limited, announced the retirement of Mr. W. K. Shane, works superintendent, as of the end of February, 1960.
Mr. Shane has been in charge of production operations for Bonnechere Lime since this company purchased the physical assets of the Shane Lime and Charcoal Co. Ltd., three years ago. Mr. R.J. Fillion is promoted to the position of works superintendent. Mr. Fillion has been assistant to Mr. Shane since moving to Eganville in 1957, and was previously in charge of the plant operations of Carleton Lime Products Co., Carleton Place.

January 20-1966
Bonnechere Lime Works Closes
Mr. and Mrs. Richard Fillion and family, residents of Eganville for the past five or six years while Mr. Fillion was plant superintendent at the Bonnechere Lime Products Plant at Fourth Chute, have returned to Carleton Place, their former place of residence. Reason for the move is the decision of the proprietor, Mr. S. J. Nielson, to close the plant until such a time as a substantial lime contract can be negotiated. For some time, a higher grade of limestone than that found at Fourth Chute was trucked from Carleton Place, where Mr. Nielson has a similar operation, and processed here, but this was found to be an uneconomical arrangement. Thus, the decision to close was reached.

The lime industry is one of the oldest in this district and it is a pity that the present action is necessary. Besides employing up to fifteen hands, depending on how many kilns were burned – there are three on the property – successive owners have always purchased large quantities of kiln wood, from farmers in the earlier days, and slabs from sawmill operators in later years. It contributed a great deal to the local economy and it is hoped
that changed conditions will enable them to reopen in the not too distant future.

1986
July 9
Another Bit of Local History Is Dismantled
Sixty-three years ago, limestone cut from a nearby quarry made its way high over the Fourth Chute road, between Eganville and Douglas, for the first time on a newly-built tramway, to be dumped into one of three big kilns.
Ever since, motorists have passed under this tramway, marvelling at the structure and its huge supporting towers. Abandoned for nearly 20 years, many are unaware of the history behind the tramway and the lime kilns and in recent years, the old site has become sort of an attraction in itself. But it’s all history now. The last piece of steel overpass was dismantled and trucked away last Monday.
Fig4.jpg
The steel overpass over the Fourth Chute Road that was used for carting lime stone from the quarries in small cars on a railway track to the kilns, and the kilns themselves were dismantled in 1987.
Map.jpg
Map of the area (my pencil markings of the location of the CN & CP rail lines – I’m unclear of the Douglas to Eganville route) EDB

This is Sandy Quinn-Jones taken near the lime kiln. Photo Tom Edwards 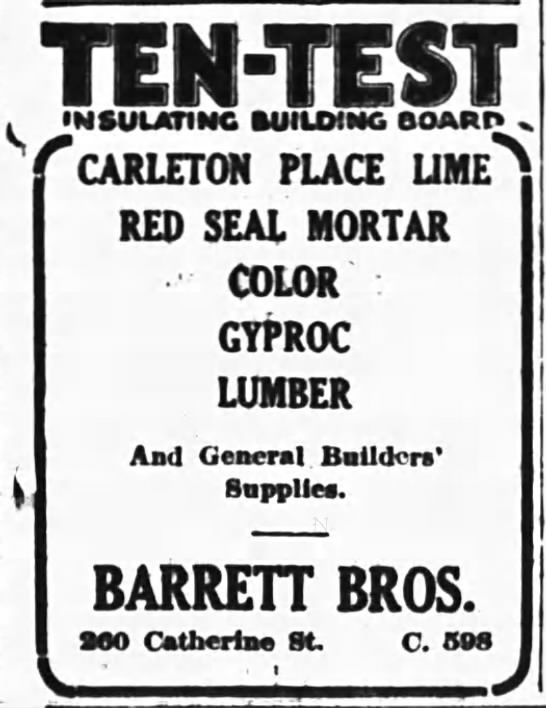 A Kiln? Looking for information please