Clipped from The Ottawa Citizen, 17 Apr 1963, Wed, Page 5
Two boys clung desperately to a small clump of trees on the Mississippi River here Tuesday as raging spring water sucked their powerless light boat to the brink of 100-foot-long Almonte Falls. Area persons who know the river well say the two would certainly have been battered to death on rocks had they not kept their grip until rescue came. Philip Low, 12, son of Mr. and Mrs. Edward Low, and Joseph Wooldridge, 14, son of Mr. and Mrs. Harry Wooldridge, grabbed the overhead branches as they drifted past shortly after the motor of the boat quit. They hung on for ‘ 25 minutes. Too scared to yell They clung tenaciously while Joseph cried for help. Philip said afterwards he was too scared to even yell. Terry Roberts, a teenager, heard their pleas while crossing a nearby bridge and ran to a restaurant operated by Philip’s father. Mr. Low and Joseph Kean jumped in the Low boat and then picked up Fire Chief Durward Washburn in front of the town hall, where he had run to pick up a coil of rope. The men made their way cautiously to the clump of trees and then threw the rope to the boys, who tied it to their boat’s anchor chain. Mr. Kean said afterwards the boys surely would have been killed if they had lost their grip and allowed the boat to go over the falls. There are three other sets of rocky falls a short distance downstream. The river at this point is known as “Little Niagara”. Joseph said all he could think about was how terrifying it would be to have to ride the boat over the four falls.

The Tragic Death of Dr. Mostyn Shocked the People of Almonte 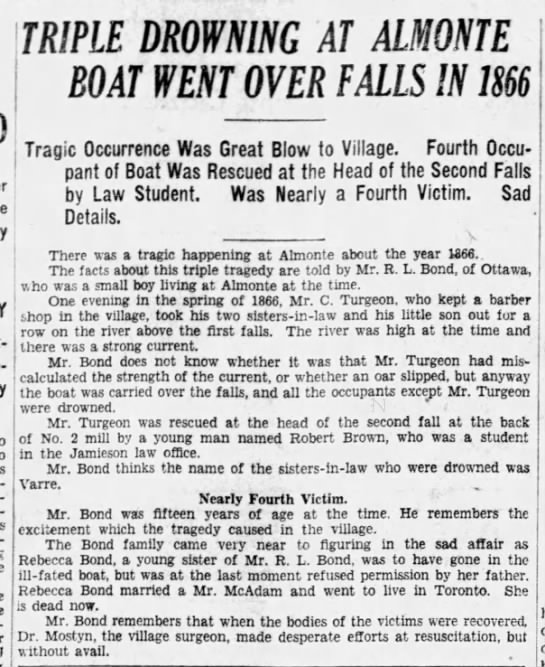