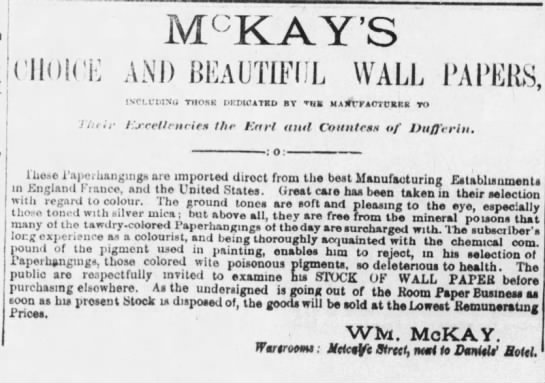 1875 Ad from the Ottawa Citizen

Those looks might strike you dead, but in the Victorian period, wallpaper could–and did–kill. In one sense, it wasn’t that unusual. Arsenic was everywhere in the Victorian period, from food colouring to baby carriages–especially in the colour green. Even though nobody was eating the paper (and people did know arsenic was deadly if eaten), it could cause people to get sick and die. wallpaper-makers, had stopped using arsenic in their papers as the result of public pressure. As newspaper reports and other media popularized the idea that arsenic was toxic, and not just when ingested, consumers finally turned away.

Jacob Bond was born February 18, 1837 and died May 1873 from accidental poisoning on Bridge Street where Joie Bonds store was. Irma Willoughby’s husband was related to the Bonds and she was working on the Bond Family tree and was able to fill in some of the blanks. She said the accidental poisoning was because of the glue in the wallpaper that was highly toxic in small-enclosed areas. It is unclear why Joseph died in July 1874.

Jacob was the first of ten children born to Joseph and Henrietta Bond. Jacob was a shoemaker and cloth finisher. It is unknown when Joseph’s tombstone was brought back to the Bond store with the intention of fixing it but how long it had been there is unclear and unknown and it remained in the basement until the building was sold. 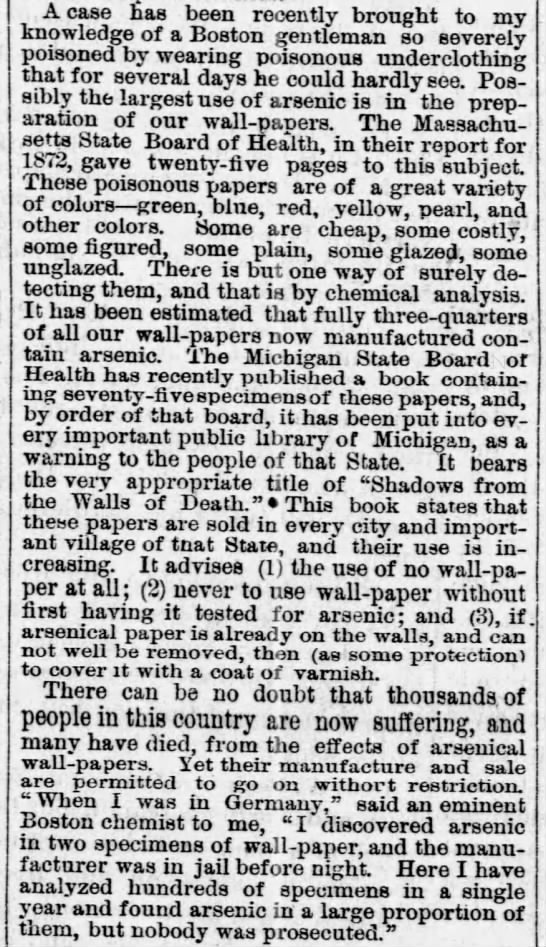 The Writing Could be Under Your Wallpaper

So Who Painted Those Wall Murals at our Carleton Place Hotels?