“It was a hot July day as the preacher led us out into the water…I never will forget when he immersed me and I came up…The preacher thought I was shouting but it wasn’t a move of the spirit but that the water was ice cold”.

George Frizzell has more than just a professional interest in the photographs of river baptisms that are part of the assortment of historic artifacts he oversees as curator of Special Collections at Western Carolina University’s Hunter Library.

That’s because Frizzell himself was immersed in the cold waters of the Tuckaseegee River as a young boy growing up in Jackson County in the 1960s, and he has written about the subject of baptism as an adult for a historical record of Little Savannah Baptist Church that he authored in 1994 for the church’s 80th anniversary. 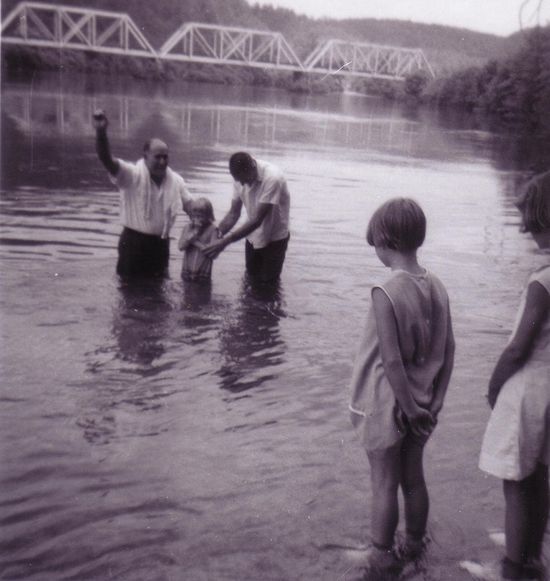 “I was baptized in the Tuckaseegee River near Rolling Green community where the Ashe Bridge, which is now gone, crossed the river from the old two-lane Highway 107 to Old Settlement Road,” Frizzell recounted. “For some reason I recall wearing a white shirt. Never having learned to swim, it was a startling experience to suddenly be submerged. My most vivid memories are of being totally under water while being held by the pastor and another church member and the bright light of the sun coming through the river water and my closed eyelids.”

Frizzell would have been 12 or 13 years old (he cannot remember if it occurred before or after his birthday that summer) at the time of his baptism in 1967. That was the same year that the Beatles released their groundbreaking record Sgt. Pepper’s Lonely Hearts Club Band, an album whose track “Lucy in the Sky with Diamonds,” with its imagery of rivers and dazzling lights, incidentally has nothing to do with baptism, unlike the lyrics of country music star Kenny Chesney’s song “Baptism.

Baptisms in outdoor bodies of water once were commonplace. In fact, they were the only game in town in the earliest days of the Christian faith, long before the development of such modern trappings as large church buildings with often-ornate baptismal pools, not to mention prior to the onset of indoor plumbing. Outdoor baptisms have remained fairly common in the American South, in part because of the slower rate at which those modernizations came to the region, and in part because of a more traditional mentality when it comes to religious beliefs and practices. And, outdoor baptisms seem to be making somewhat of a comeback in popularity—especially in the Smoky Mountain region, where the wide varieties of rivers, creeks, lakes and ponds combined with the spirituality that can be found in natural surroundings of the mountains readily lend themselves to baptisms in the great outdoors.