Mr. Robert Young, 240 Fifth avenue, was formerly a resident of Almonte. He was born in the township of Ramsay, about 1 mile from Almonte, but went to Almonte to live about the year 1870. He is able to tell some interesting stories about things which happened in and about Almonte in the 1860s-1880s. The first of Mr. Young’s narrations concerns the sad drowning of Dr. Mostyn and a young son of Rev. J. W. Manning in the seventies.

Early in the month of April Dr. Mostyn received a call to Appleton, six miles west, and decided to go by rowboat as the river was open except for ice on the banks.  Dr. Mostyn, who was a very popular physician, arranged with young Manning, who was a clerk in a store in Almonte, to go with him.

The two were seen to leave the village early in the morning, but were not again seen alive by any Almonte people. They appear to have reached Appleton and to have set out for home in the afternoon. Before they left Appleton, a strong wind had got up and the Mississippi was quite choppy. At Gleason’s Bay the wind must have upset the rowboat, as both the bodies were later found there.

Dr. Mostyn’s body was found in the centre of the river, where the boat likely upset. The boy’s body was found near the riverbank that had evidence that he had made a fight for it. Sadly the boy was not able to climb the icy bank. When the two did not return that day a search was made but it was several days before the bodies were found, as the river in the meantime had frozen over. Dr. Mostyn was one of the beloved “family doctor” type,  and the two victims both had large funerals.

The announcement of the death by drowning,
Monday last, of Dr. Mottyn and Jas. W.
Manning, jr., produced a profound feeling of
sadness in Almonte, and made every citizen a
mourner. The melancholy occurrence was so
unexpected, so sudden and startling, that the
Ontario reports were generally discredited; but
when, after investigation, the awful truth was
established the feeling of sorrow and regret that
prevailed was intense and unutterable.
The circumstances are as follows : Dr. Mostyn
was anxious to visit a patient at Appleton on
Saturday last, and owing to the rough state of
the roads, concluded to go up in a row-boat.
Disappointed in getting a’ man to row on
Saturday, he postponed his visit till Monday,
when be was accompanied by Mr. James^ W.
Manning Jr., who took a gun along with him
to have a shot or two on the way.

The skiff used belonged to Mr. Manning; it was short and
narrow, and had been built we believe for
amateur racing. On Monday a high wind was
blowing up the river, and the atmosphere was
raw and cold. The trip was made with safety
to Appleton. Dr. Mostyn visited bis patient and
Mr. Manning made an engagement with the
hotel keeper there to meet him in Almonte on
the following forenoon, on license business. The
unfortunate gentlemen left Appleton on the return
journey about half-past four o ’clock, being
accompanied to the landing place by Mr. Adam Teskey.

This was the last seen of them. Dr.
Mostyn was seated in the stern of the boat, steering
and paddling. Mr. Manning was rowing.
On the following morning, Mrs. Manning,
mother of the deceased, becoming alarmed at
her son’s prolonged absence, made inquiries;
and about noon, when Mr. Arthurs, the Appleton
hotel keeper, arrived and found that be had
not returned, the fears of the friends of the two
gentlemen were aroused.

A number of boats at once proceeded up the river; and they found,
about three and a half miles above Almonte, or
a mile below Appleton, the upturned
boat used, and near by one of the oars. Another
oar was found about two hundred yards below
the boat, and still further down stream, in
Gleeson’s Bay the fur cap worn by Dr. Mostyn
was found floating near the ice. No other evidence was found on
Tuesday, although the search was kept up until
midnight.

On Wednesday seventy-five men
in boats, from Almonte and Carleton Place,
dragged the river unremittingly all day.
The Dr.’s overcoat was pulled up from the
bottom, and some distance below a pair of
gloves worn by Mr. Manning, a paddle and a
briar root pipe were found floating on the water.

Thanks for posting story of these tragic drownings. Here’s a few details to add about James William Manning Jr. who was my 2nd great-uncle.

James was 28 at the time, the eldest son of James William Manning & Elizabeth Hodges. His father was away on a speaking tour of Great Britain, sponsored by the United Kingdom Temperance Alliance. James was unmarried and lived at his parent’s Almonte home on Elgin St.

The Almonte Gazette described James as “Possessing talents of a high order, his future was bright and promising. A dutiful son, a genial warm-hearted friend, an upright honourable, manly man, James Manning has gone to his rest…”

James’ body was recovered eight days after the accident. His funeral to the Auld Kirk cemetery was held under the auspices of the Oddfellows, of which James was a member. 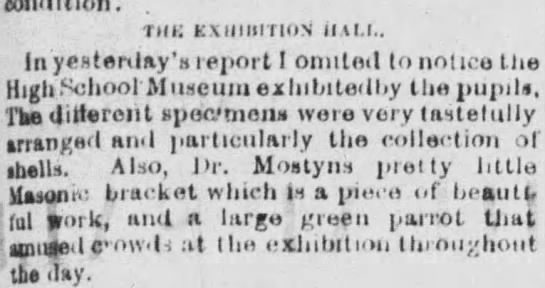