“The Miss Civil Service beauty contests would solidify the ideology of  femininity and beauty that was at the core of the Cold War cult of domesticity while justifying the gender division of labour.”

Though the 1950s was in many ways a period of conformity with traditional gender roles, it was also a decade of change, when discontent with the status quo was emerging. Popular culture and the mass media reinforced messages about traditional gender roles, consumer culture, and the Cold War ideal of domesticity, but the reality of women’s lives did not always reflect these ideals. Between 1946 and 1964, the largest generation known as the baby boomers, were born. This demographic trend in turn reinforced women’s identities as wives and mothers. Despite societal norms that encouraged women to stay in the home and out of the workplace, approximately forty percent of women with young children, and at least half of women with older children, chose to remain in the work force.

Did you know our local Ottawa government encouraged civil service beauty contests in order to project how females should act like in the workforce? I had no idea that these ‘contests’ existed until I came across them in the news archives and I was immediately floored. Gay people were considered security risks in the late 1950s and it was all about security and keeping your employees in line–especially women. The civil service beauty contests were established as they were what was considered appropriate behaviour for all female civil servants.

When I opened my store Flash Cadilac on Rideau Street in 1976 I not only had the artistic folks come and shop. On bi-weekly cheque days civil servants flocked to my store to buy things that they could use to live out their fantasies in their homes. At Halloween “the crowds went wild” as they say, and the lowly civil servant became alive. They were seeking independence and adventure that their 9-5 jobs did not give them. I heard many  times that they felt like they were in dead end jobs.

Being chosen queen of the department, or queen of the civil service, gave winners instant celebrity status. They became ambassadors of the Canadian civil service and met high ranking officials and opened events. They were like Miss America or any other beauty pageant queen,  and they were told  to project what every other female in the civil service could become if they put their mind to it. These contests were considered proper feminine behaviour and to be encouraged.  Of course talks for Mr. Civil Service came soon after– but it never materialized. These contests were used as nothing more than hidden security props because gender practices were central to the construction of the Canadian national security state. 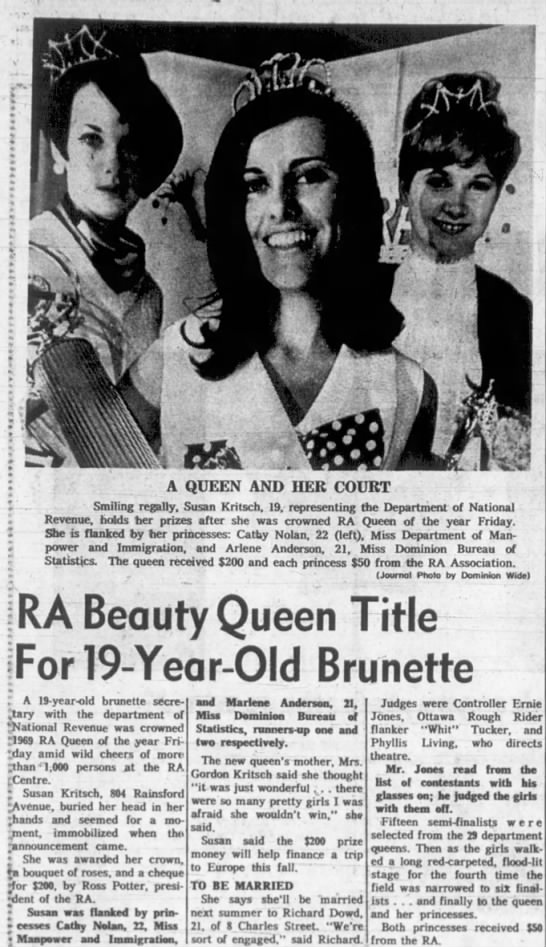 The establishment of a tenacious Canadian security state came as no accident. On the contrary, the highest levels of government and the police, along with non-governmental interests and institutions, were involved in a concerted campaign. The security state grouped ordinary Canadians into dozens of political stereotypes and labelled them as threats.