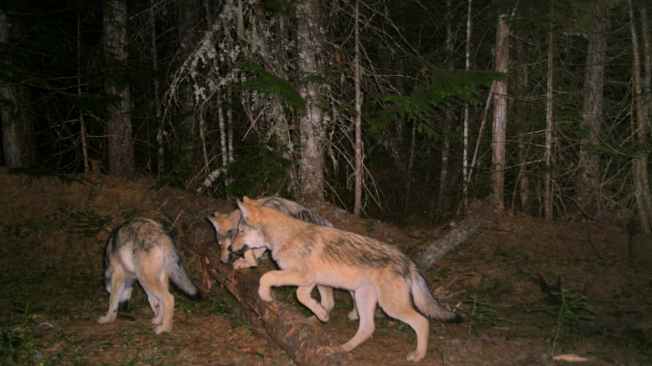 This could be a Believe-it-or-not story, but someone told me he got it directly from the mouth of the grandparents of the youth who in 1843 had the exciting and rather remarkable experience, which is about to be told of.

In the year 1843, Robert Fraser who was then a boy of 16, lived with his parents in Bytown. In that year be decided to strike out- for himself by going to a lumber camp  west of Bell’s Corners in Lanark County. In those days it was a common thing for boys to do  at the tender age of 16.  Anyway, young Robert Fraser was big for his age and quite self reliant. His parents packed his clothes into a flour bag, and on top of the clothes his mother put in a number of hunks of boiled pork and some bread to keep him from being hungry.

Throwing the bag over his shoulder Robert started off bravely along the then bush bordered and lonesome road to Lanark County. All went well till the youth had passed Britannia. Then suddenly “to his rear he beard the yelping of a pack of wolves”. The boy hurried as fast as he could, but he soon became assured that the wolves were on his trail. Young Robert, besides being brave, was a youth of resource. He had often heard stories of how people who were chased by wolves had stayed off attack by throwing them eatables, or part of their clothing, etc.

Suddenly he remembered the hunks of pork in his bag. Opening the bag he took out a hunk of pork, and got ready to try out the idea. He, however, kept moving as fast as he could. The wolves soon came into sight. There were about 20 in the pack. When the wolves got close enough to see what he would drop, he threw one of the hunks of pork.

The pack of wolves saw the pork and dashed at it, forgetting the boy for the time. A royal melee followed. The wolves attacked each other and two or three of their number were killed. As the wolves again neared him the boy threw out another hunk and another -respite was enjoyed. This sort of thing went on until the boy had only one hunk of pork left. By this time the wolf pack had dwindled to eight.

The youth was still a long way from the camp and he had about given up hope of saving his life, when a short distance ahead he saw a deserted lumber shanty. He ran for dear life, throwing out the last piece of bread, but holding onto his bag he ran madly for the shelter. Soon the wolves (six of them left)  were on his heels again.

With the wolves yelping wildly,  Robert flung open the door of the deserted cabin and dashed in. He got behind the door and stood ready for his life or death play. He knew that if  this ruse failed that it would be all over with him. It was a tense moment.  In dashed the wolves. As they entered Robert threw the bag of clothes into the far corner of the cabin.

Then our hero very quietly stepped out and closed the door. He was outside and the wolves  were inside. On the outside of the door was a chain and near it a nail on which to hook it. He threw on the hook and breathed more easily. Then the the youth, relieved of  the wolves for now ran quickly without stopping until he reached the lumber camp.

There he told his story. A dozen men armed with guns and axes went back to the deserted cabin and throwing open the door the six wolves which dashed, and as soon as they came out they were shot and killed with sharp axes. The men went back over the road and picked up the wolves, brought to camp so they might be able to collect the bounty. In due time the bounty was collected and the boy’s bravery and coolness greatly praised by the government authorities. Believe it or not!