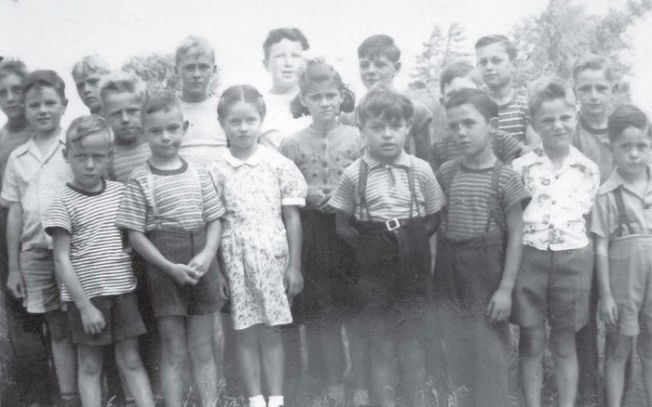 According to a lady who was a granddaughter of Ingram Scott, one of the pioneers of the Pakenham district, one of Mr. Scott’s daughters, used to tell about the early days in the log school house near Pakenham. The school master believed that to spare the rod was to ruin the child. If an offence was committed in the school room and he could not find the guilty pupil it was his practise to make the whole crowd sit along two benches both girls and boys and whack them soundly over the legs with a hickory stick as he passed up and down the line.

In explanation of this proceeding he said he was bound to inflict punishment on the actual culprit. This above information came to the Almonte Gazette from a lady who lived in Perth. The lady sent to the Gazette a certificate which her grandfather Ingram Scott had received from Sheriff -Thompson of Perth that he had served on the grand Jury there in 1860.

In commenting on this the Gazette wrote:  “The certificate from Sheriff Thompson like the receipt has been filled in with the quill pen that did service long ago. It would be interesting to know how Mr. Scott got to Perth in December, 1860. He probably, went on horseback or walked. In, connection with Sheriff Thompson it is rather interesting to recall that he lived to be over 100 years old.

Until upwards of 20 years ago he was a familiar figure on the streets of Perth. At the last he was quite blind and deaf and was walking on the arm of his daughter. A son William Thompson, was deputy sheriff for a long time, and died only a few years ago. Ingram Scott is a grandfather of William and Harry Scott of Pakenham, and of Mrs. James Gillan, of Kinburn. He was one of the pioneers of Pakenham  Township, and was a neighbour of Charles Dunlop, grandfather of George L. Comba of Almonte. These two gentlemen were fine citizens of the community in their day and had much to do with the beginning of educational facilities in the district where they lived.

Pakenham Township,
Lanark County, Ont.
1918 Directory
Names are listed in the order published — most of them are in alphabetical order by first letter only, but some may be completely out of order. Please use the “Search” function of your browser to look for all occurrences of a name. Obvious errors have been noted at the end of the line [in square brackets], but numerals, especially “5” and “6”, are sometimes impossible to tell apart in the photocopies.