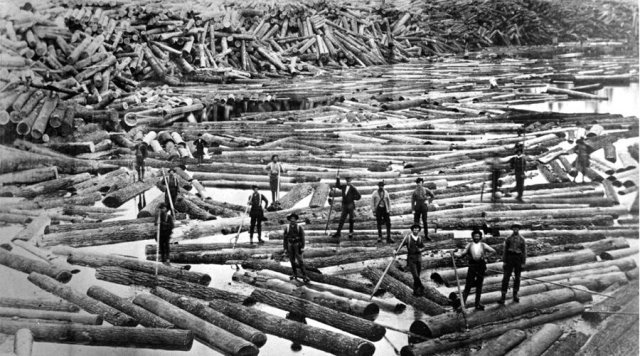 Mr. Joseph Halpenny  remembered a time when his father William and his uncle John Halpenny kept a hotel in Pembroke from the 1860s to the early 1870s when the hauling of supplies to the lumber shanties was in full swing. The Halpenny hotel at that period was headquarters for the teamsters from Lanark and Renfrew counties as they passed through Pembroke. Pembroke was an overnight stop. Though Mr. Halpenny was only a boy of about six in 1871 he has a vivW recollection of how at that time his father’s hotel would be crowded with teamsters. Every bed in the house would be occupied and every square foot of room would be occupied by men lying rolled up in their blankets on the floor. Mr. Halpenny recalls these teamsters as being big powerful men to whom the lifting of a barrel of pork was a mere trifle.

Most of the teamsters ate their meals in the Halpenny dining room, but on the other hand, many of them carried their own grub with them in boxes, and ate their meals wherever they could around the hotel. Mr. Halpenny’s greatest delight at that period of his life was to eat with the teamsters out of their boxes and to share their home-made bread, their cold fat pork, and the dainties which their wives had packed in the boxes for them.

Mr. Halpenny recalls an elderly teamster whom he called “Uncle” Robert Livingston, whose box meal he usually shared. “Uncle” Livingston always had doughnuts in his box and these he shared liberally with the boy. Mr. Halpenny says that as many as 150 teamsters have been in his father’s hotel over night. His father had two large sheds and they could accommodate some 50 teams under cover.

Prior to opening the hotel in Pembroke, Willaim Halpenny had kept a “stopping place” two miles from Forester’s Falls in Ross township. The stop of the shanty teams there was a noon stop, Grandfather John Halpenny had gone into Ross township as a farmer in the pioneer days back in the late 1840s.

William Halpenny did not live long after moving to Pembroke, In 1865. He died in 1871, the result of a cold sustained in 1869, when Prince Arthur visited Pembroke. After the death of Mr. Halpenny the Halpenny hotel was sold and became the Munroe House

Pembroke was incorporated as a town in 1878 and as a city in 1971. It was named seat for Renfrew County in 1861. This set the stage for construction shortly thereafter on the Renfrew County Courthouse, which finished in 1867, and the arrival of many civil servants, much wealth and much construction. In the 20-year period following 1861, Pembroke basically became the city it is today in terms of layout and buildings, although many homes and other structures have been lost to time. A fire in 1918 destroyed much of Pembroke’s downtown.

Other historic buildings that survive in Pembroke include a historic synagogue, two original hospitals, the Dunlop mansion (Grey Gables Manor Bed & Breakfast), the ‘Munroe Block’ downtown, and two houses belonging to the White family. A fire in 1918 downtown destroyed many buildings, including the Pembroke Opera House

As shown by the quotation below, which is perhaps equal parts promotion and fact, the economic atmosphere of Pembroke during the period when our fashions graced its streets and hotels, attracted many people to set up residence here.

“Both for business purposes and residential purposes Pembroke is a most desirable town. Because of its advantageous surroundings, its commercial facilities, its advantages as a shipping and distributing point, its excellent sanitary conditions, and the thousand and one things that make the town a desirable place in which to live, it has attracted, during the past few years, capitalists and business men from afar.
The district surrounding Pembroke is one of the richest agricultural districts in Eastern Canada. The farmers are all well-to-do, while many of them have accumulated fortunes. 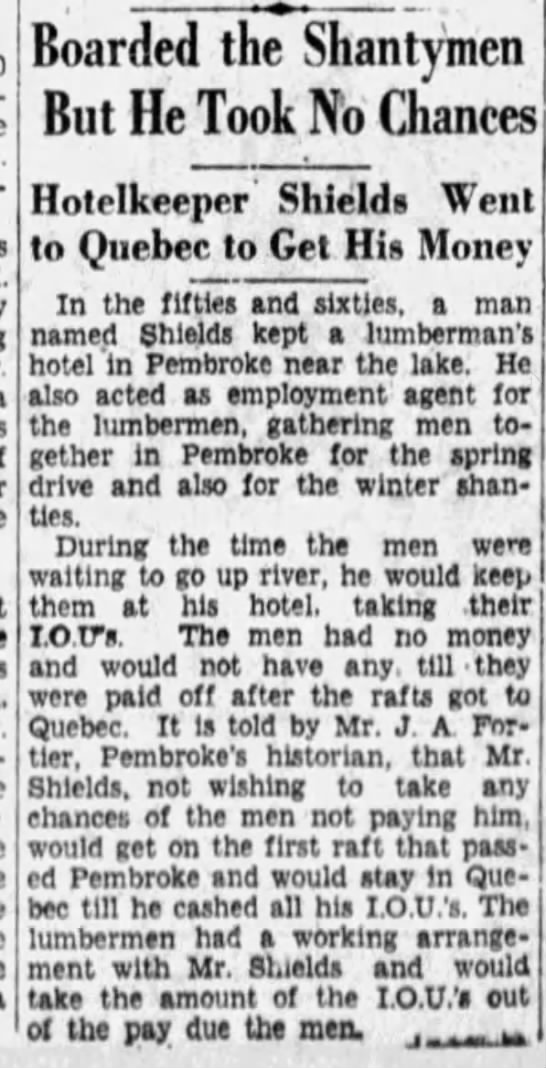 Notes From the Ottawa Valley

Notes from an illustrated talk Sept. 20, 2018, at the Upper Ottawa Genealogical Group Library