The war was on between Perth and Carleton Place gasoline dealers and one operator says he’s giving up the business. Bob Chapman of Carleton Place (Golden Eagle) says there’s too much competition to earn a decent living. “Everyone seems to be getting into the act. I’m retiring from the gas business. There’s no money in it anymore”.

Differences of up to nine cents a litre were being reported between the two towns and the small dealerships were hurting. Saveway Gas dealer, Santiego Diaz of Carleton Place said he wasn’t sure where prices are going. “I’ll have to go to our head office to find out what can be done about the situation.” 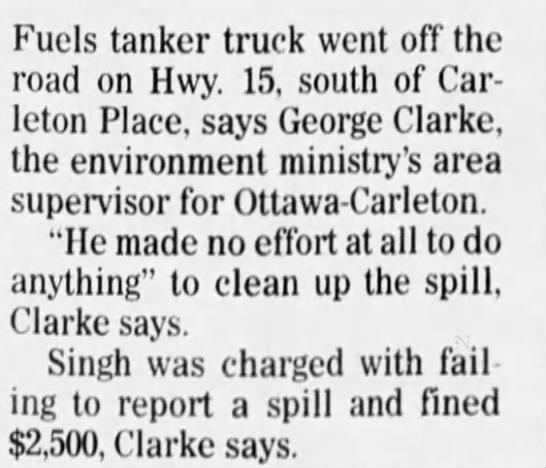 Diaz was currently selling regular gas at 37.9 cents per litre and unleaded at 41.9 cents. At Denny’s Service Centre in Carleton Place gas prices were between 42 and 44 cents and owner Dennis Miller says,”I really don’t know what’s going on. Prices are being reduced but it’s not affecting me. After six years in the business, Miller said he had built up a steady clientele. “They prefer to come here because they know they’re going to get service.”

Perth Shell dealer Garfield Leach was concerned about where the price war could lead. “When something like this happens, the dealer gets caught in the middle. If I drop my prices I lose one-third of my markup.” Leach says gas companies do offer relief in the form of consignment sales for dealers interested. , “The company could offer to let me lower my prices if I sell on consignment, I would be guaranteed a profit but it would be less than what I make -now,” Leach says. Leach thinks about consignment all the time but says: “I’m in business to make profits.”

Self-serve Esso dealer Bill McGonegal of Carleton Place says the situation was much the same as a price war that took place two years ago. “One day someone lowers his price and I have to follow him. My price is down to 36.6 cents and I think things have pretty much settled now,” McGonegal says.

But McGonegal’s neighbour wasn’t sure. Dwight Cochrane at Orr Pontiac expects to drop his prices again next week. “Bill and I are friends and we don’t want to start anything but, if his price drops, mine will have to. The price war is hurting my business,” Cochrane said. 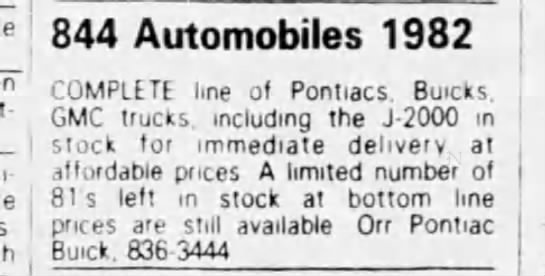 Perth resident Delbert Bolton was irate about the local state of gas prices. “We’re being taken. The dealers have got to be playing games with us. I can go to Carleton Place and save $5.60 on a fill up.” “I’d prefer to spend my money where I earn it but if they don’t change, I’m not going to feel guilty about going out of town to buy gas. 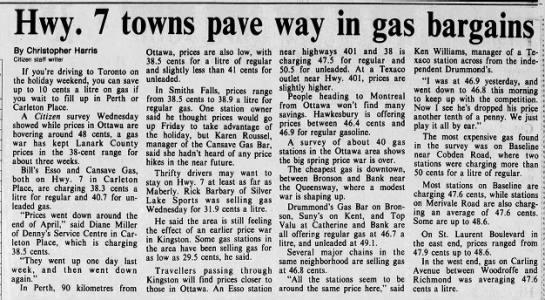