In 1835, almost a hundred years before the Prison for Women opened, the first three women arrived at Kingston Penitentiary, just across the road from the future site of the Prison for Women. Susan Turner, Hannah Downes and Hannah Baglen, all serving one to two years for larceny, were housed temporarily in the prison hospital until a separate facility could be found. It was not until 1839 that they were moved to part of the North Wing, then designated as the first prison for women in Canada.

Women inmates rarely came into contact with their male counterparts. While several babies were born inside the walls, the women conceived before they had been admitted to the prison. In some cases, mothers were allowed to keep their babies in their cells, usually only as long as was necessary to wean them, after which the child would be sent to an orphanage or to family members.

Conditions for the women were similar to those for men, or worse. Their quarters were cold, damp and crawling with bugs. Punishment for infractions of rules included floggings and placement in the “box”: a coffin-like container with air holes, in which a woman was forced to stand, hunched over, for hours at a time. Women, like men offenders, could also be chained, submerged in ice water, put in a dark cell or fed only bread and water. And so it went for years. In 1881, Matron Mary Leahy reported for the year that various members of the inmate population of 15 had spent a total of 14 days in solitary confinement on a diet of bread and water.

Although their numbers were comparatively small, women prisoners in Kingston Penitentiary seldom had enough room; as their numbers increased they were moved several times within the prison. In 1858, the Warden reported that eight women were forced to sleep in the corridor due to a lack of cells. In 1867, the Inspector strongly advocated in his annual report that a proper women’s prison be built outside the walls of Kingston Penitentiary.

Regrettably, no action was taken and conditions for incarcerated women remained poor. Productive activity for the women was often in short supply and limited to typically “female” pursuits: the manufacture of inmate clothing and other needlework activities. In 1872, Matron Leahy reported that the women inmates had made, among other things, 201 aprons, 34 sun bonnets, 406 pillowcases and 1,480 pairs of socks.

In 1889, Inspector James G. Moylan, referring to the women’s area of Kingston Penitentiary, stated as follows: “I have always considered this portion of the penitentiary unfit for the use that is made of it. Apart from its objectionable proximity to the male prison, the cells being underground in a gloomy and dismal compartment is sufficient cause for recommending a change.”

In 1909, a partial remedy was decided upon: a new, separate prison for women would be constructed, but it would still be located within the walls of Kingston Penitentiary. By February 1913, male inmates had completed construction of the Northwest Cell Block and the women inmates moved into their new quarters. There were 32 single-occupancy cells and two double sick-bay cells.

The following year, the Royal Commission on Penitentiaries, having favourably commented on the new building, nonetheless stated “… that the interests of all concerned would be best served if those few inmates were transferred to an institution for women. It may be possible that, as has been suggested elsewhere in this report, in connection with certain other classes, arrangements might be made with the provincial authorities for the custody of all female offenders.”

In 1934, after 99 years, the women were at last moved from Kingston Penitentiary to a separate institution – across the road, behind the Warden’s residence and into the new Prison for Women. It wasn’t any closer to home and it certainly wasn’t what many of them had hoped for. Women in prison in Canada 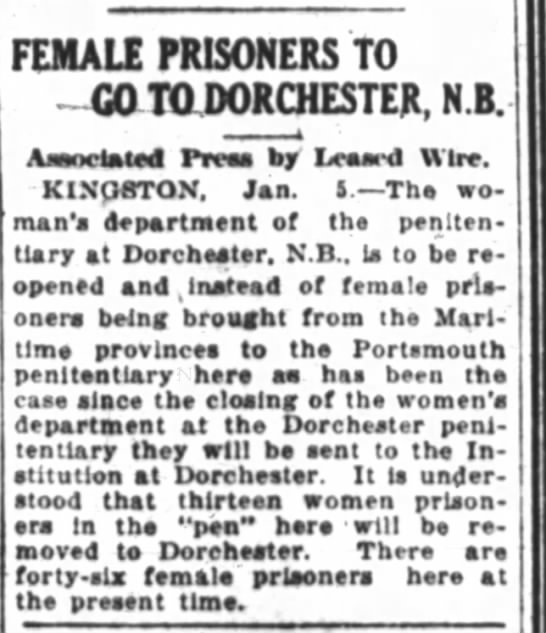