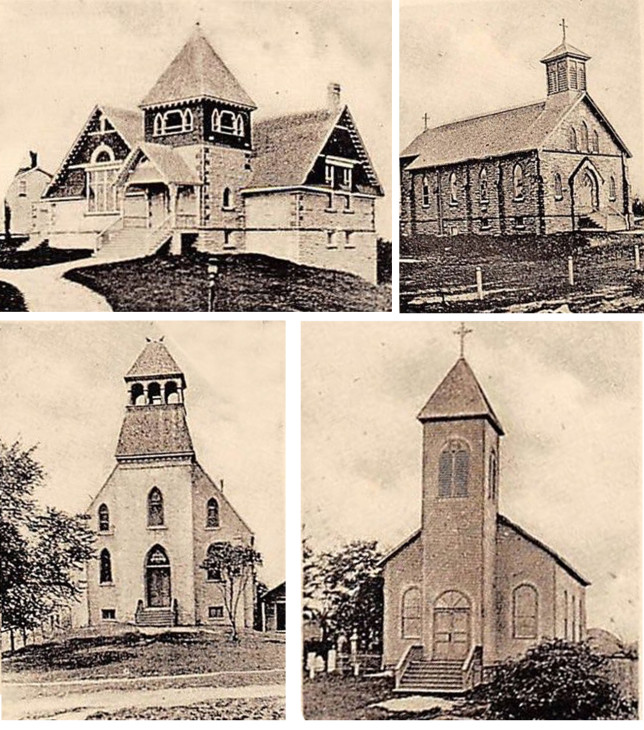 On the 23rd of January, 1821, back in Quebec, Dalhousie wrote
the Duke of Hamilton to suggest that contributions be sought in the
Glasgow area for the building of a church in New Lanark, a small village in
Lanark township pleasantly situated on the Clyde River about 15 miles from
Perth.

This was done and in 1823, £ 280 were sent to Canada from Scotland
for the purpose. Soon a stone church with eight windows was built.
It had a gallery across the back and room for three hundred persons.
But although the emigrants had sought a minister even before leaving
Scotland, one was not easily to be found.

In June, 1820, when the ship Commerce was docked at Greenock preparing
to sail for Quebec with one of the first shiploads of the Lanarkshire
emigrants, one of the Presbyterian Scots had handed a petition to the
Rev. Mr. Robert Easton, a Montreal Secession Presbyterian minister
standing on the landing. The petition, signed by the Presbyterian

emigrants, asked that a minister be sent to their new home in Upper Canada.
Easton seemed the logical man to receive the petition because he was in
Scotland for the purpose of raising funds to send Presbyterian clergymen
to British North America. No answer was received from Easton and over a
year later, in September 1821, the Presbyterian Church Committee at
Lanark, Upper Canada, again wrote Easton, now back in Montreal. The
Committee stated that sites for the church and school had been granted and
that a house is now in a state of forwardness to answer the double
purpose of church and school. But again, no answer was received.
By March, 1822, a schoolmaster had arrived in the township and “it was
agreed by the church managers that unless they had some answer to their
request for a minister they would apply directly to Earl Bathurst and the
Joint Committee in Edinburgh” – the latter committee had sent the Rev.
Mr. William Bell to the town of Perth. What the Lanark Committee evidently
did not know was that an ordained Presbyterian minister, the Rev. Mr.
John Gemmell, was already among them.

Gemmell, a 61 year old Ayrshire Scot and a Secession Presbyterian
minister, had been ordained to a “Lifter” congregation in Dairy, Ayrshire.
Because of inadequate payment of his salary,he had turned first to
medicine, receiving a medical degree from the University of Glasgow, and
then to the printing business. Gemmell and his family emigrated in 1821
to Lanar k township but it was not until August, 1822, that he held his first
church service in the township. Gemmell never managed to rally Lanark’s
Presbyterians around him:the ministry was but one third of his professional
interests, he outspokenly supported one party, even in his sermons, in
a divided community and he visited each community too infrequently – usually once a month. —Early Settlement in Lanark County and the Glasgow Colonial Society by E.A. McDougall

Social News of the Lanarkites 1898