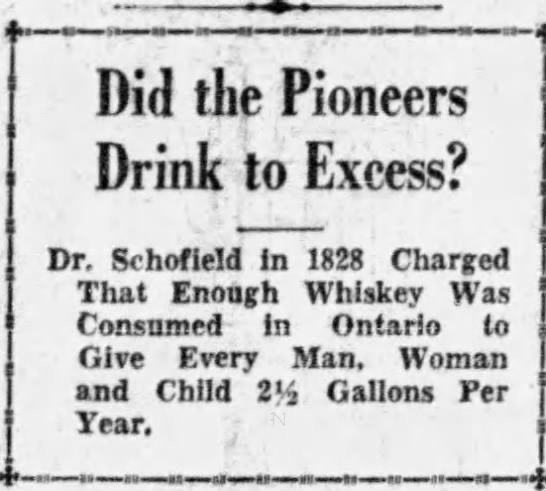 I posted the above newspapers clipping yesterday and folks wanted to know who Dr,.Schofield was.

So who was Dr. Schofield?

In 1828, the temperance movement in Upper Canada got its start in Delta with a 4 hour sermon delivered on June 10, 1828, by Dr. Peter Schofield, an eminent medical doctor, distressed by the impact of drunkenness on society. Dr. Schofield delivered the sermon in the Old Stone Mill, a highlight of which was his rather vivid description of death by ″spontaneous combustion.″ He noted that ″it is well authenticated, that many habitual drinkers of ardent spirits are brought to their end by what is called spontaneous combustion″ and then went on to describe in some detail an event he’d witnessed.

Delta (used to be called Beverly) was the first place for a temperance address in Ontario. About 208 years ago, when the Americans were planning the strategy they figured would land them a sizeable chunk of Upper Canadian real estate. The boys around Delta, Ontario, were mortaring in the last stone of the new grist mill. Two years later when the War of 1812 became official the mill was in full swing action, its great stone grinding the government gift of grain and wheat into pure white flour. The Loyalists had arrived by then and the benevolent Upper Canada government was paying them off for their loyalty to the Crown with three years’ free supply of basic foodstuff.

The grist mill business was a booming enterprise in those days when, with a little government assistance, a man could build a reasonable good mill for around $2,400. Demand was high and it was not uncommon for a man to have to wait in line several days for his turn at the millstone. The government had provided, also us a Loyalist gift, portable steel mills that were hand operated and turned out a rather coarse, unrefined flour. They resembled coffee or pepper grinders and proved unwieldy and of little value. So most, flour demands had to be met by mills like the one at Delta, a small community 20 miles west of Brockville. The American flag never did fly as the conqueror’s banner over Upper Canada but the Delta grist mill still stands where the men of that day gathered to grind and talk of the war. But, Delta was still the first place that marked the first Temperance foundation.

Photos from the McRae Family

Photos from the McRae Family

Did you Know that Temperance Drinks Are all the Rage Now?

Taverns the Press and the other End of the Valley