New George L. Comba School Opened Officially at Almonte – ALMONTE, March 21.–(Special) – The official opening of the new $80,000 George L. Comba Public School took place Friday night and a large gathering was on hand to see Mr. Comba hand the key over to Principal John C. Sutherland. The four-classroom school which accommodates 140 pupils was named in honor of Mr. Comba for his 35 years service as secretary-treasurer of the Public School Board. The school, which is H-shaped, has a combined area of 5,800 square feet. It was built in such a way that additional classrooms could be added in the future without changing the oil-heating system. Howard Davey was the general contractor and included in the list of sub-contractors were J. H. Martin of Almonte, who did the heating, plumbing, and ventilation, and A. W. Smith of Almonte who did the lighting. Senior School. D. Ward McGill, chairman of the Public School Board, acted as chairman for the opening ceremonies and Mayor Alex McDonald welcomed the guests. In receiving the key from Mr. Comba, Mr. Sutherland said he hoped to see the school grow and develop from a junior to a senior school.. Grades one to six are now being taught by Mr. Sutherland and the following staff: Miss A. Gillie, Miss M. Turner and Mrs. M. Turner. Arthur W. Smith, president of the Almonte branch of the Canadian Legion, made the presentation of the school flag and commended the school board for their work in the new project. J. W. Barber, inspector of public schools, spoke briefly and said everyone should feel proud and give, thanks for the new school. There would have to be many sacrifices made, however, until it was paid for. Dedication of the new school and the closing benediction was given by Rev. F. F. Reade of Almonte. During the evening Miss Judy DeSadeleer made the presentation of a bouquet of flowers to Mrs. G. L. Comba in appreciation for her services helping her husband carry out his duties during his recent illness. Members of the local Scouts were on hand to help during the ceremony and included in the guest list were the present, school board along with last year’s members and members of the town council. At the close of the evening Mrs. John Sutherland and Mrs. George L. Comba poured tea and refreshments were served.
Wendy Decaire Ahh, my sweet great Uncle George. I think Kathy may have that photo at our family home. It may be dated. Early 50s

IN TORONTO TOMORROW, flying squads of Red Cross volunteers will conduct a blitz of the downtown area. Shown here are Tanya Patterson, Kay Gilmour and Eileen Comba, who display a placard telling of planned efforts of 350 fund-raise

The Co-operative Nursery School of Almonte
The school has its origins in a private nursery school founded by Doris Comba in 1959. By 1960, the school had relocated to its present location. In 1973, the parents decided to establish a co-operative and since then it has been a non-profit organization. It operates and is regulated by the Childcare and Early Year Act of Ontario.

My mother was Doris Comba and she was married to Murray (funeral director on Church street)I lived there from 1949 to 1952. I remember Donnie Petersen, a good friend who lived behind us. We lived on Church street across from Comba’s funeral home, also Jerry Keeley and his whole family, very good friend. Remember diving off front bridge and also into the flume off the railroad bridge. My cousin was Hugh Mcmullan; he lived in the big stone house just up from the Flour Mill on Main Street.
Remember Stan and Jessie Morton and their children, used to go to the Ball games at the fairgrounds on summer nights. Swam at Donaldson’s and Murray used to take us kids to the big Rock at Blakeney as well as the rapids. Loved going with Donnie to his Dad’s Ice Cream Factory, worked there a couple of summers with Mr.Thorpe, Archie and the rest of the crew, My mom worked as Mr. Petersens Bookkeeper for awhile and then for Harry Gun at the IGA market before she married Murray.  Had a crush on Judy Guthrie and Sylvia Gale back when the world was young. Would love to hear from any who knew me way back then. The best years of my life, at least as a kid–Jack De Sadeleer Australia from almonte.com 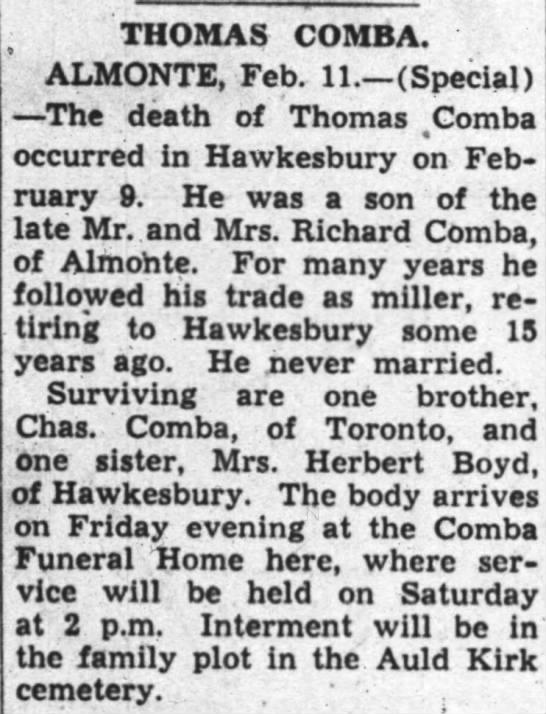