I was a child who missed the saddle shoes of the 40s and the 50s by a few years, but my older Albert Street friend and neighbour Verna May Wilson made up for me. There were those of of my friends who thought the return of saddle shoes in 1972 was the best thing since Lucky Charms and Lava Lamps. Then there were two or three and myself who said they hated the entire situation with I believe we said, “You’ve got to be kidding me!”. And, as would be expected, there were a few old timers that had to throw in their two cents and tell “us kids” about the “olden days”. One of my friends launched the conversation, and her first words were, “Hey, saddle shoes are coming back, and my Mother thinks that is great!” For her Mother it was like smelling wine and roses— no, more like winning a sweepstakes contest.

Some of you some will remember the old days of saddle shoes when you bought them sparkling white and clean, and then you tried your very hardest to get them dirty before the kids at school got the chance to do the job for you. Seems nice white saddle shoes just wasn’t the thing in those days, and it was very painful to have your friends trying to take every inch of bark off the uppers of your saddle shoes.

I really don’t wander around beginning conversations about saddle shoes these days, but when the subject has come up  I once again have always always expressed my displeasure with them.

I do remember hearing Verna telling me her Mother became hysterical at the sight of the new saddle shoes when she returned home after her first day at school. They were scuffed and gave the appearance of having gone through a small war, but that was the “in” way to wear saddle shoes.

Day after day a bit more wear and tear became noticeable, and just about the time you really got the uppers of your saddle shoes to the point where they were socially acceptable with the “In” crowd things started happening to the rest of the shoes, and it was time to get a new pair.

There were all sorts of things Verna Wilson did with saddle shoes. She would change her laces to match an outfit and I swear some peaked out of their Albert Street Venetian blinds on a daily basis to see what she had done. But, this was a girl that came home at lunchtime to change into another fresh white blouse that she wore with her navy blue school tunic, and she was perfect in my eyes.

She mentioned there was a professional scuffer at Cowansville High School that would scuff your saddle shoes for a nominal price. I heard that his scuffing business was so popular that you had to wait as long as three or four days to get his attention.

My style once older never followed Verna, but it involved my Grandmother’s borrowed pearls, penny loafers, with a scent of Evening in Paris. I was also so mesmerized with tap dancing that sometimes I taped nickles on the bottom of my shoes. The coin sometimes came in handy for a call on an emergency payphone. Can you even imagine– a penny! But after months of wearing them my father began calling them “clodhoppers” as that’s what they used to call big shoes that just didn’t fit well anymore.

Shoes have always been part of everyone’s lives and they can either afford you the adoration of your peers, or jeers from the cool kids table in the lunch room. Should we get into the Hush Puppies era, or can we just stop now at Saddle Shoes and Loafers and suppress those memories?

Did you know that all these shoes we wore actually changed the shape of our feet over the course of our lives? As Leonardo DaVinci once said, “The human foot is a masterpiece of engineering and a work of art.”  Maybe so, but after a lifetime of fashionable shoes, my feet are no masterpieces– they in fact looked like very scuffed Saddle shoes that no one would want– and that my friends are going easy on them.

I was Linda Knight, Junior bridesmaid at this wedding.:) 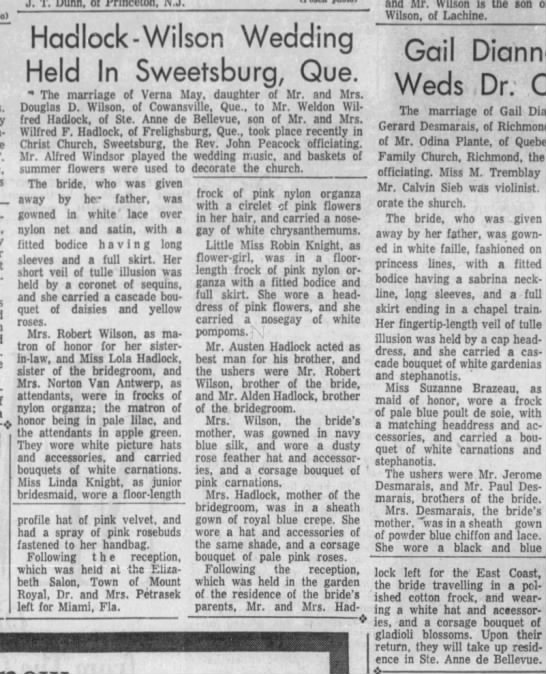