Baldwin was a butcher by trade had settled along the  Laundrie road but by 1820 he and his family had all left the area. His son Stillman lived on the Frontenac road north of Swamp Creek

The story is that one night he heard a commotion in his hen house and inside with the poultry was a man handing his prize hands to another accomplice outside the door who was holding the bag.

Stillman managed to get the bag away unknown to the man inside who was still busy picking chickens. Without glancing back and skipping a beat the criminal told Still man that he thought he had all of them and that made 22 chickens they could sell.

He grabbed the man and said when he fed them last night there had been 24 and the theif got out of his grasp and hightailed it into the countryside. did this upset the poultry man? Not on your life! He simply put the hens back and went back to the house. Just another night on Frontenac Road.

Mitchell Brooks had one son named Lester who lived out his life as a bachelor in Abinger near Mallory Hill. One day a neighbour noticed 5 round holes on the floor along one wall in the shed. He asked what they were for. Les said they were for his cats. Why were there 5 holes asked the neighbour? Les said,” I have 5 cats and when I say scat I mean scat!”

John Dack was a cheese maker in Ardoch had  two daughters and  one of them Etha Dack became an actress on Broadway and also acted on road companies. She was also a believer in Mrs. Deacon’s Ghost. Mrs. Deacon had been murdered by her husband across from the Mississippi River and her ghost was said to be in the form of a twinkling light among the trees. No one will know if this ghost story is true, or was it just a matter of car lights coming over the hill.

When you type in her name, not a lot comes up, but today I found out some more about her Etha Dack De Laney and decoded to record more of her biography.  A daughter of John Dack  and Julia Denna–after her father died she went to live with her Grandmother in Pakenham. Her mother never really over came the shock of her  father’s passing and could never bear the thought of going back to Ardoch. Etha spent over 30 years in the US trying to become a star but when she returned to Perth she purchased the property at 18 Isabella and converted it as the Four Winds Hospital which she operated until it was sold to the G. W.M Hospital.

She left school in the beginning when she was really too young and lied about her age so she could get nursing instruction to go and aid the troops druing the first World War. She was in the service 14 months, 11 of it being in England. After the war she went to work in Detroit and during that time took some courses and ended up on stage during some stock work. She had a short mental breakdown and went into Vaudeville. 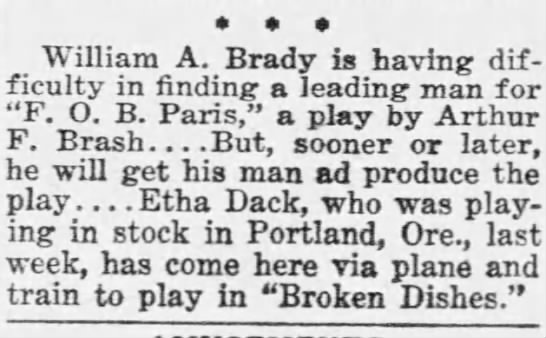 Dr. Elkington lived in Plevna with his family about 1897. His war experience in Crimea conditioned him to walk long distances to care for his patients. One night he set out on foot to travel 12 miles to visit one of his patients. His route crossed the Mississippi River and having no boat he stripped off his clothes and floated them across on a piece of birch bark. He reached his patient who was near death from loss of blood while cutting timber in the nick of time and saved his life. He made the return trip on a night that there was frost in the air as it was nearing winter on foot and once again by swimming the river.

With files from Away Back in Clarendon and Miller

The Deacon Murder—Away Back in Clarendon and Miller