Does this sinkhole still exist? Thanks to Lucy Connelly Poaps here is a photo of one of the last pictures of Horseshoe Bridge on the 2nd line of Ramsay that carried traffic around the sinkhole. The bridge was closed in 1940 in favour of a detour road around the pit. The photo shows the deteriorating old bridge on the right. I would like to create some memories of this. Anyone remember anything?

Stuart McIntosh The only sinkhole I know of on the 2nd line is west of Don Miller’s farm..they drove down rods to find bottom around 60 feet down so putting down a proper road straight through was abandoned. About a mile south on the first line the road is built on a corduroy structure underneath if not mistaken.. either way I wouldn’t drive a team into there summer or winter.

Rose Mary Sarsfield That’s the one Stuart McIntosh! I saw articles on this when I was going through the newspapers but I didn’t save the info…I had enough to save on just Clayton!

Brent Cowan I believe this sinkhole was across from the Cavanagh pit on Tatlock Rd between Hwy 7 and Wolf Grove Rd. It would be on private land that was owned by the Millers the last I knew of it. They owned the big farms in that area about 10 yrs ago. Before it was paved in the 90’s, there was a very tight S turn that went around the sinkhole (which they did try to fill with many loads of large rocks to no avail) and that corner saw many rollovers. Since it’s been paved and straightened everyone has forgotten. When you cross the large fields, you’ll see a tree line and an opening, there’s an old baler sitting there, and access to the other side of the bridge is close to Miller rd and has a gate on it. 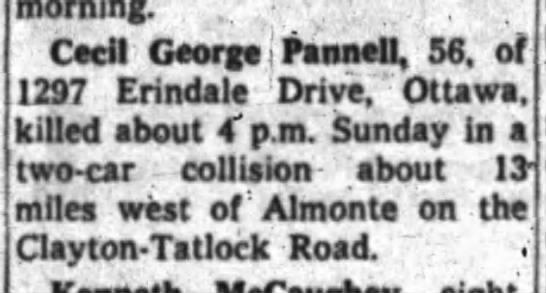