If you look at that little yellow house on the left hand side– this is what it looked like in the 80s and early 90s until it was torn down.

Sterling SomervilleTook a picture of it, got heck from a old lady,s ,for put phote in Perth Courier back in March 12 1987.the house is gone ,like Herron Mill dam ,what a shame ,home on corner near by also.

Lorna Deachman
That belonged to my Aunt.
Mary Campbell —The Storie house

In 1935 the wooden structure over the Clyde River near Herron’s Mills, on the Third Concession, has been closed to traffic owing to the stringers giving way under a heavy truck load of logs. The truck got safely over, but the bridge was no longer safe for furthur traffic.

It is possible that a new bridge will be erected instead of the old bridge being repaired. In the same year a “Beaver Dam’ Bridge was erected over the Clyde near Herron’s Mills and opened for traffic in September. It didn’t last long however, and in 1938 the old Beaver Dam Bridge was torn down and the piers demolished as it was a menace to the new bridge downstream from it.

In 1935 Ed LeMaister of Almonte was the successful tenderer for supplying gravel for the county road between the Clydeville Bridge and Herron’s Mills. His tender was 65 cents per yard. he to purchase the gravel, haul it and pay  the foreman in charge. 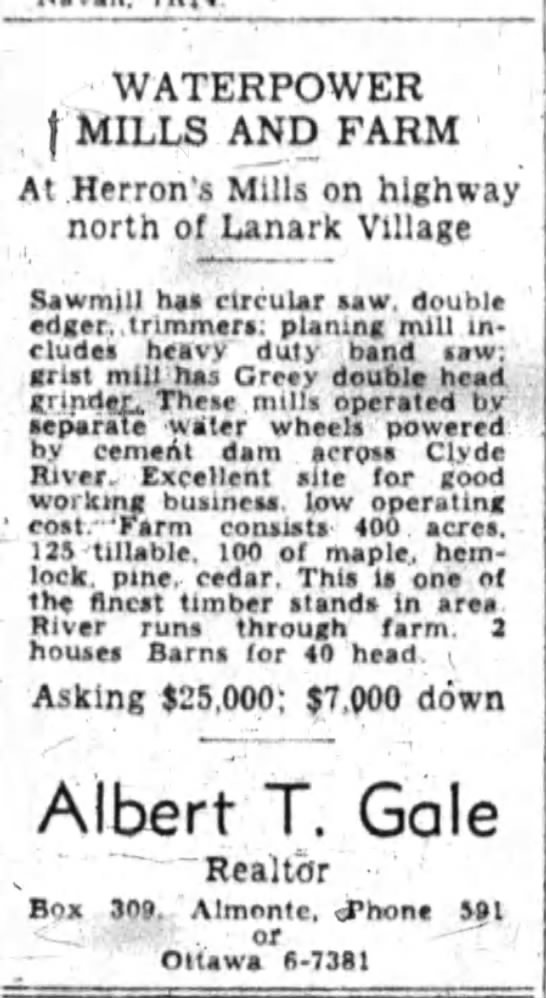