I have an interest in reading about the Almonte Flour Mill, particularly going back to the time Edward Mitcheson founded and owned the grist mill. Mitcheson was the founder of the north side of Almonte known at that time as Victoria.

Edwards widow, Rachel, owned my house on Thomas St in 1870 and probably prior to that, but records are hard to find prior to the 1870 amalgamation of present day Almonte.

From my research it appears that following Edward’s death in 1856 is the same time frame that James Rosamond moved from Carleton Place to Almonte. James lived in the same house until his death, he was in his 90’s. Through my research I’ve not been able to precisely say where James took up residence in Almonte, but I believe it might be the same residence of Edward and his widow Rachel, and could possibly be the mansion facing the flour mill on Main St., which also backs on Peterson St beside Canadian Hydro Components.


Going from memory of what I’ve found online, I can add the following:
Wilkinson St off Union St N is the maiden name of Rachel and the street turns on to Mitcheson Street.

Edward Mitcheson owned the land that surrounds Union St N. Edward and Rachel are buried in the old cemetery near Ace Hardware on County rd 29. Rachel moved to Manitoba to live with her daughter following Edward’s death.


The front door of my house on Thomas St faces the (now) rail trail, most likely because prior to rail usage, it was a street–which dates my house prior to 1860. Lastly, I would like to know if there is any documentation of where the residence of either Edward or James is located. —From  Kathy McAuley

I could not find much — but I am going to keep looking.

#6- T and J Mitcheson from Almonte went bankrupt and their cases were taken over by a Brockville firm (sons?) 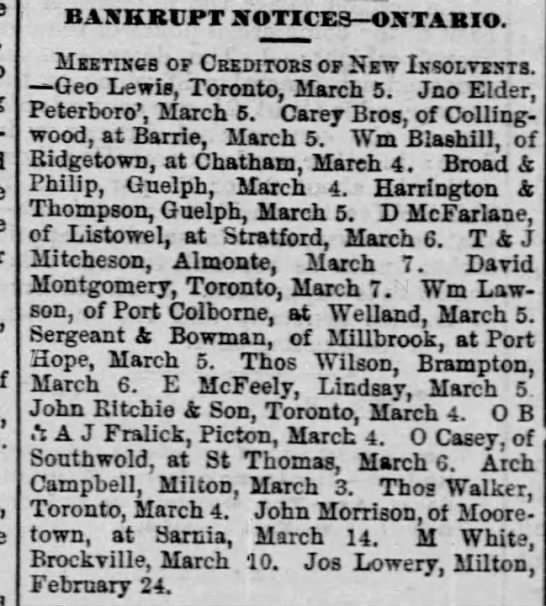 A three storey flour mill built on the east side of the upper falls in the 1840s by Edward Mitcheson was bought some few years later by J. B. Wylie, and James H. Wylie.  The Hon. James Wylie’s eldest son, William G. Wylie, a magistrate and township treasurer, had died at Havana in 1851 on his way to the California gold fields.

*Perth Courier.. November 23, 1847 – A boy named Isaac Mitcheson, son of Edward Mitcheson, proprietor of the new Mills in Ramsayville, approached too near an iron shaft in the third flat of the mills, which caught hold of his clothes and knocked him violently against some posts that stood near causing almost instant death. The boy was three years and six months old. 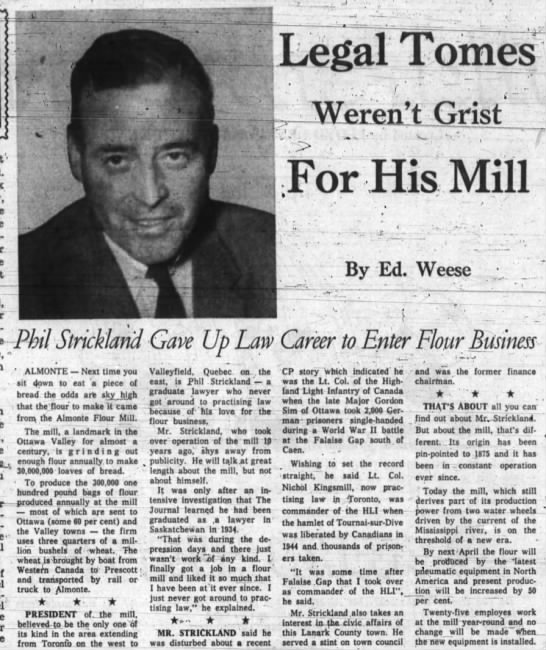 Rachel Wilkinson was brought up by Robert Mansell and his wife Susannah. Land for the cemetery on Hwy 2 was donated by Robert Mansell. Story is that Wilkinsoon parents died on board ship from England(1820) and that they brought Rachel to Ramsay. Robert Mansell left Rachel then Mrs Michteson, a beqeust in his will.

Cant help with history of houses.
Judith Salley
Come and visit the Lanark County Genealogical Society Facebook page– what’s there? Cool old photos–and lots of things interesting to read. Also check out The Tales of Carleton Place and The Tales of Almonte
Information where you can buy all Linda Seccaspina’s books-You can also read Linda in The Townships Sun  Screamin’ Mamas (USA)  and The Sherbrooke Record