The first hardware shop in this building on Mill Street was Kaufman’s Hardware Store, which fire destroyed in September of 1909.  In fact the whole block came tumbling down, and the building was replaced the following year with the brick structure that still stands on Mill Street. The new building included three separate two-story units, and they were numbered 34, 36 and 38

Between 1921 and 1924, the Knight family  leased the space at 36 Mill Street, operating as Knight Bros. Hardware Store. The store and its stock were bought by N.S. (Norval Stewart) Lee in 1924 and were part of the Almonte downtown for three generations. It became known locally for its eye-catching front window displays and second-floor “toy land” full of children’s treasures as you can read in the comments below by the folks on The Tales of Almonte. 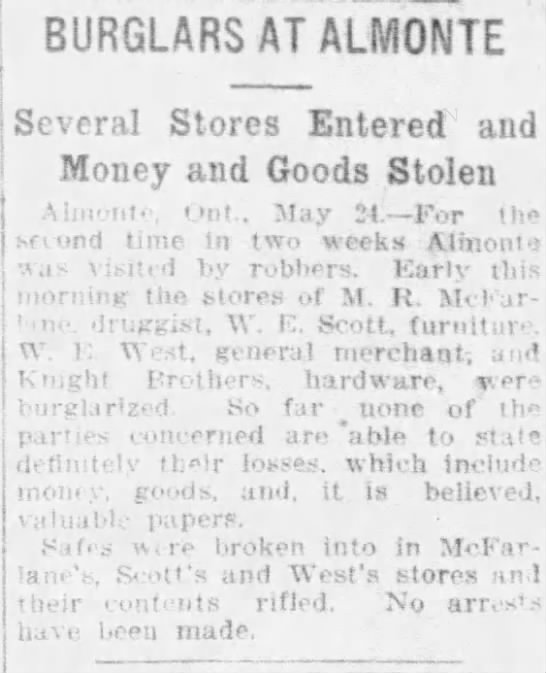 Leonard Lee’s family bought the building in 1998 and has run businesses from it since. Mr. Lee and his sons, Robin and James, intend to keep the legacy of serving the community alive through their old-fashioned store, which is open Monday through Saturday from 10 a.m. to 5 p.m.

Susan Elliott Topping– I used to stare in awe at these windows every Christmas season!! The second floor was all toys and opened at Christmas for shopping!! We were late more than once to school because we would stop in before and after!! Great memories!!

Des H Julian— I remember one of the first TV s.and on Sat nite my grandfather and a few other people would stand outside and watch the hockey game. Ive been in that store often when i lived in Allmonte as a teenager.yes memories

Linda Nilson-Rogers The Christmas window was definitely a delight for kids!

Pete Brunelle when I was a kid going upstairs during christmas season was truely heaven on earth .. all the games and toys .. It was amazing ..

D Christopher Vaughan Yep, like a lot of people, I remember the upstairs at Christmas. I want to say they called it Toy Land, but not sure. I was shocked at how small it was when I went back as an adult. As a child it seemed to go on forever!

Colleen Montgomery I remember also the upstairs. It definetly was a Christmas wonderland. I used to have great chats with Mr. Lee (may he rest in peace) about his life in Almonte. Very interesting man.

Ronald Ford I can remember the windows took days to setup. Every child in tomorrow would-be waiting for toyland to open.

Jan McNeill My uncle, Durward “Slip” Washburn worked for N.S. Lee for many years. I remember visiting the store in the 50’s. Durward was also the Fire Chief in Almonte for many years.

Peter Low When it’s all said and done – “The best Christmases are celebrated in a small town. Before, during, and after.”

Terrence Miller--In the late forties my brother Tom and I were Boy Scouts . and I bought a hunting knife and hatchet from Lee’ Hardware. I still have them, although new sheaves were made for them. .Mr. .Callow was the leader of the scouts. 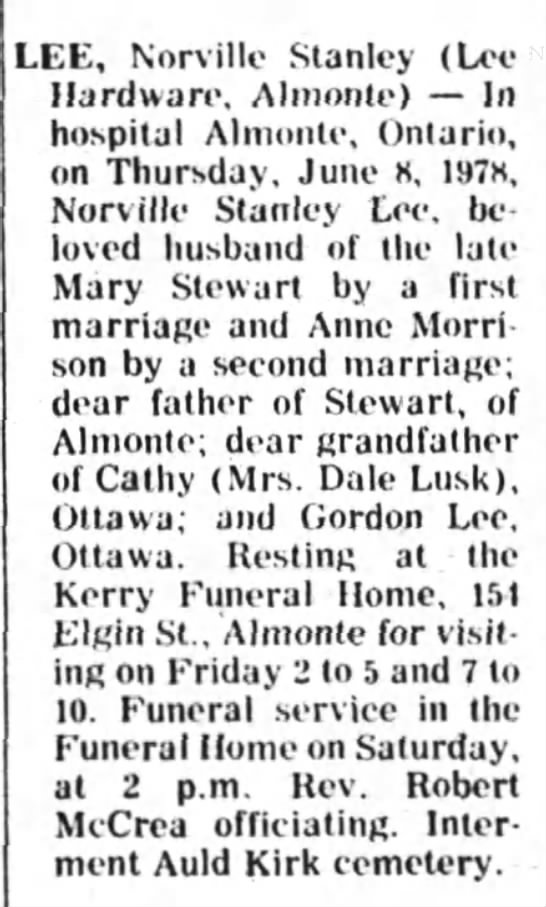