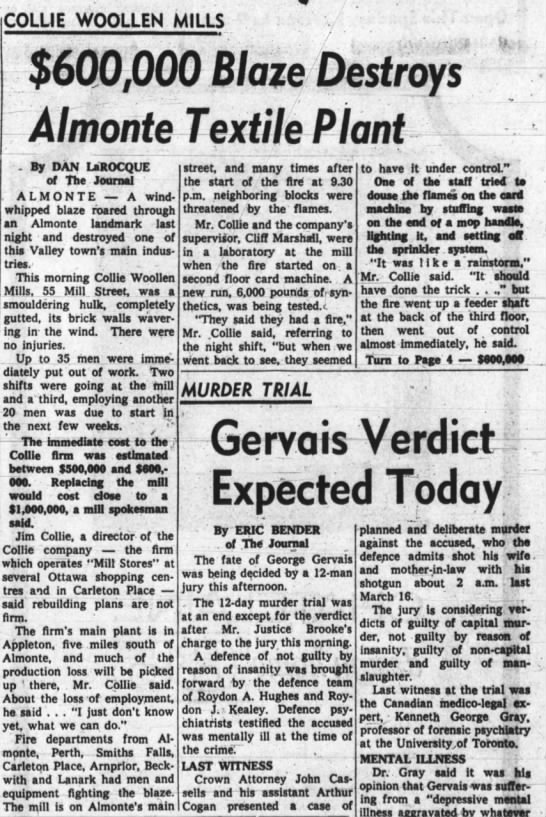 All text from the Almonte Gazette– Support the Mississippi Valley Textile Mill for all they do. October 7, 1965. Many thanks to Peggy Byrne for telling me.

Bruce Collie photo I think this is circa 2003 at the International Plowing Match in Appleton. Dad did a lot of work preparing a textile presentation that was well received by attendees.

Glenna Kells-– Collies mill was just below the post office on right hand side… just before Petersons Dairy….seems to me they build a new post office and riverside park on the site.

Susan Elliott Topping I remember the night it burned down. Watched with my Uncle Cheeser from his little sports car!

Linda Nilson-Rogers I remember it smouldered for many days, perhaps weeks. I think there were a few flare ups too

Terry Latham We drove over from CP think it was my first big fire to see . Then I was a Firefighter at the Big Appleton fire..

Peggy Byrne Check out the Oct. 7, 1965 edition of the Almonte Gazette online. The fire occurred on the Friday night prior to this edition being published so that would make it Oct. 1, 1965.

Karen Hirst I remember this fire…business owners very concerned that is didn’t spread and take out the main street. Lots of people, firemen, hoses up and down the street—scary to a young girl. I was down with my Dad (John Kerry )hoping it didn’t spread across the street and down to his furniture store.

Peter Low I remembered it was on a Friday night. I was watching “The Outer Limits” when the fire broke out. My dad served coffee to the firemen throughout the night.

I can recall Almonte Fire Dept had just bought a new firetruck, a 1965 GMC 980 Series, and it was manufactured by Thibault Fire Apparatus in Pierreville, Quebec. The Dept also had a 1951 GMC (manufactured by Bickle Seagrave) and a 1934 GMC pumper. All 3 trucks were at this fire (as well as assistance from fire departments from Carleton Place and perhaps Smiths Falls). The 1951 GMC was sold to Pakenham Fire Dept some time in the late 70s, early 80s. The 1965 and the 1934 are still with Mississippi Mills Fire Dept, though long retired but still used in parades.