Carleton Place and Beckwith Heritage Museum photo–
The mill on McArthur Island. Built in 1871 by Archibald McArthur, this woolen mill manufactured fine worsteds and tweeds. It was purchased by Bates and Innes in 1907 who produced OV brand blankets and long underwear.

If you were had heard about the building of the Carleton Place town hall in 1889, chances were you knew about the grand staircase inside that led you up to the impressive opera hall. All looked grand to someone that might drive through town- in fact one might say Carleton Place was the ‘promised land’ of Lanark County. But, if you stayed a spell you might feel that dark cloud that hung over Carleton Place according to Glenn Lockwood in his book Beckwith.

Most of the folks that lived there were labourers and worked long hours in the unhealthy conditions of the mills.  Normal shifts in the late 1800s and early 1900s were usually 12-14 hours a day, with extra time required during busy periods. Workers were often required to clean their machines during their mealtimes. Those workers that tried to fight back with unions were fired, so 60 locals formed The Knights of Labour, but it never caught on and ended in 1889.  Fines were sometimes imposed for talking or whistling, leaving the room without permission, or having a little dirt on a machine.

Carleton Place and Beckwith Heritage Museum Photo–This is the only such photograph in the museum’s collection. Dated 1899 it shows a group of workers posing in front of the stone and wood frame building.

Many of the Findlay workers in the early years tried to install a weak union for better benefits. But, if a man joined a trade union, they were not only sacked, but also blacklisted, so they became unemployable. The employees rented rooms, lived with other workers, or lived in shacks in an area I have previously written about called Happy Valley just off of *Townline Road.

But, it was better to be working at the mills in the early days than to be begging for work. The Findlays became a hated family to some in those early times, even though they employed a great deal of people in town. Glenn Lockwood in his book Beckwith quoted William Findlay once saying that he had heard the phrase: “The God-damned Findlays” one too many times. Most appreciated working at Findlays, but some took their hate of the family through the generations.  The demise of the Findlay stone home on High Street encouraged by a few members of council (as told by Dumps Bradley) might be an example of how unhappy some of the past generations hated working for them. In later years Findlays was a beloved company to all, but when industry began in Carleton Place there were many disgruntled workers.

As I wrote yesterday in: Just Like a Clue Game –“Who Dun it” in Beckwith? in 1903 Findlay employee Cardy Miller took away his sorrow by a self inflicted shot to the heart on the 10th line. as He could take no more working at the Findlay mill. It became an immediate inquest as they thought it was murder– but found out later he had bought the gun and bullets at Taylor’s Hardware store in Carleton Place and did himself in.

But, in those days you did what you could to make ends meet, and the mills were a way of  employing the rural towns. Thankfully, conditions changed and the history of their positive trials and triumphs never died through the generations.

Cotton thread had to be spun in damp, warm conditions. Going straight out into the cold night air led to many cases of pneumonia. The air was full of dust, which led to chest and lung diseases and loud noise made by machines damaged workers’ hearing. 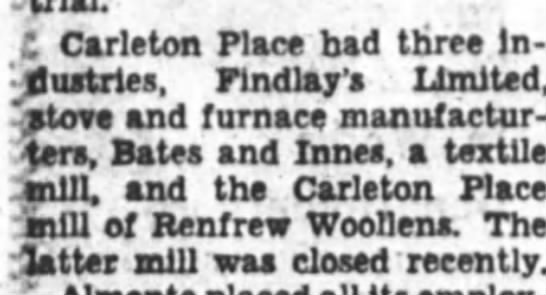 Just Like a Clue Game –“Who Dun it” in Beckwith?

Did You Know Where Happy Valley was in Carleton Place?

The River Dance of the McArthur Mill in Carleton Place