According to a few settlers tales the Village of Lanark was laid out the same way as Perth. However, it didn’t look like a town in appearance, but more like a rather thickly settled farming district. The Clyde River was much the same size as the Tay and it ran through town as the Tay did in Perth. The mighty Clyde drove the only mill in the area which was used to grind all sorts of grain.

When you arrived in town you would would mostly likely have been met by the miller who had emigrated from New Lanark in Scotland. His claim to fame was being the first person who had brought a European woman into the Village of Lanark! He would tell any new visitor that he was happy, and bring them around to his home to have a meal  or two with his children.

Apparently, all was not happy in that household, and under the same roof as the miller lived a very discontented  person. The miller’s wife was so unhappy that word around the county was that she was the only miserable person this side of Perth. I highly disagree with that statement after writing about the conditions the first settlers had to live with. But, miserable or not, she would “quick step” behind her husband to hear any news or gossip from any newcomer in town.

One thing you did not discuss with the miller’s wife was the deplorable conditions of the tradespeople in Britain at the time. You would never ever discuss how fortunate the settlers were to relocate to Lanark County instead of suffering the hardships of back home.

“Dinna say that; dinna pretend to tell me that this is better than hame. I wad sooner soof the causey in Scotland than stay here,” she would argue.

Local folks would argue with her that she would have a hard time getting meat to eat, or a job, and families were basically penniless back across the pond. The miller’s wife would agree with you on that point, but her greatest concern was buying clothes like those back in Scotland. She was a decent woman she said, so she needed decent clothes, and none the likes of what they sold in Perth. The disgruntled woman never seemed to understand that clothes back home were now harder to get than meat, and that she should consider herself fortunate that she was able to enjoy the fruits of the four local whiskey distilleries.

The area around Lanark Village had only one place of worship: a handsome Presbyterian Church with a lovely spire, all built of stone. The roads from Perth to Lanark for travelling preachers was clear for only two to three miles from Perth.  Not even the prayers by the clergy could help them on that road that was only broad enough for a wagon or a sleigh. It had sharp turns around a tree or a stump that sometimes were not feasible for man nor beast.  Once you spotted cleared land or a home  you had to wade through snow or water you to inquire if you were headed in the right direction or get lost. 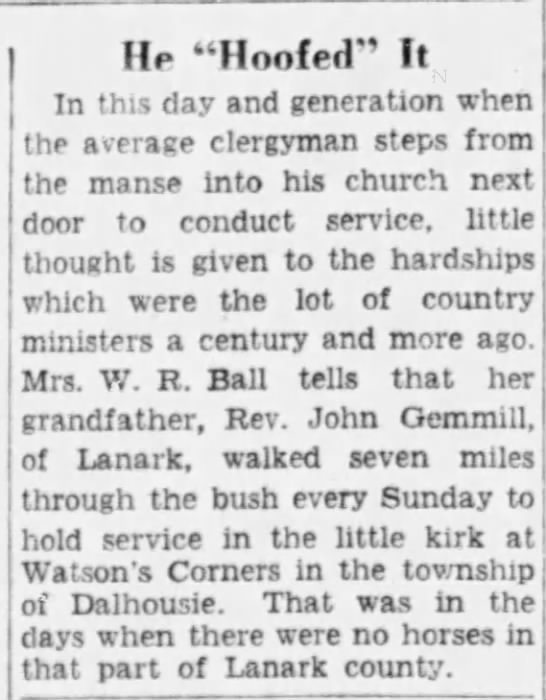 Going through the bush was done by mostly following the marks on trees and, yes those who got lost were frequent, but the blazed trees would take them to someone’s dwelling. Most times one would eat a meal or spend the night in some stranger’s home. You would not attempt these roads at night for they were dark save for a blaze in the scattered homes along the road–mostly owned by Scots. After a Sunday in the pulpit in the Village of Lanark most men of God deemed the roads fearful and their hands were sore holding on to the wagon. One has to wonder if difficult roads in those days led to beautiful locations, or heights of greatness.

So What Did We Find Out About this Photo from Lanark Village?

Lanark Village News 1887–The $5 Wager and Other Things