When the white wooden schoolhouse in Newboyne and the Harlem schoolhouse were both burned to the ground in 1915, it was rumoured the Germans were behind the arson. The brick schoolhouse was erected on County Road 5 in 1918. It closed in 1936 due to a lack of students, and the few who remained went to S.S. No. 1 Newboyne. In 1956, S.S. No. 1 closed and the students were transported to S.S. No. 2 Newboyne, which finally closed its doors in 1966 when Rideau Centennial School opened. Shortly afterwards, the old schoolhouse was sold to the Anglican Church Women (ACW) for $1 and became St. Peter’s Anglican Church Hall.

The Germans burned down the school? 1915 was a busy year for things being done the Germans in our area it seems.  In February 1915 it was said that some of the folks in Brockville and the surrounding area were returning from church and spotted something lit in the sky on February 15, 1915.  When the mayor of Brockville and three constables also witnessed this alledged incident word quickly spread up and down the valley that the Germans were invading Canada.  Read more here: Was it the Germans Or UFO’s that Invaded the Ottawa Valley in 1915?

There were many phantom German air raids and war hysteria in Quebec and Ontario during the First World War. During the Great War vivid imaginations and wild rumours were the order of the day, and local politicians did little to ease fears. Nobody knows what started the fire at the Portland schools which totally destroyed tho building, doing damage to the extent of about $1500. No coal was put in the furnace after noon on the day before– so was it the Germans, or just schools needing much needed improvements finally succumbing to fire?\

Black and white photograph of school group in front of Portland School in 1895. The school was built in 1888. Photo Our Ontario

Black and white photograph of Portland School group in 1897. Teachers identified as Hattie Donovan and Rebecca Edwards with 47 pupils. Photo Our Ontario

Black and white photograph of Portland School group in 1902. Identified as Miss Cawley, Mina Bell, and 37 pupils. Photo Our Ontario 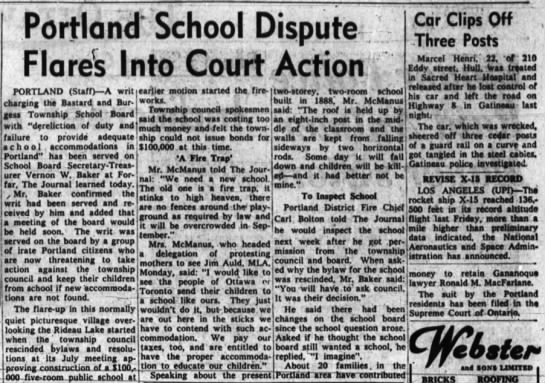 Portland is one of the early settlements along the Rideau. Although land was granted in the area of Portland in 1801, it was not until the early 1820s that a community started to grow in the location of the present day town. An 1818 map shows a trail leading to the location which is named “Old Landing.” An 1828 map also shows it as “Old Landing” with more of a substantial road leading to it (a road built in 1816). Local history credits the first settler on the village site as being Ami Chipman (b.1807, son of Heman Chipman). An 1830 map shows a “small settlement” in this location. The name of the small community was changed to Portland in 1833, in honour of William Henry Cavendish Bentinck, the 3rd Duke of Portland. The name Portland comes from the Isle of Portland, which lies off shore from Weymouth in Dorset, England.

Portland remained a centre of commerce through the 1800s, serving the commercial boat traffic that plied the Rideau. The business directory for 1866-67 listed coopers, hotel keepers, store keepers, blacksmiths, wagon makers, mitten makers, a watch maker, a miller, and a dentist. When commercial activity along the Rideau slowed down in the early 1900s, the main activity in Portland became a service centre for local residents, including the many people starting to cottage on Big Rideau Lake. This remains Portland’s raison d’être to this day.

There are several interesting buildings to see in Portland. These include the Emmanuel Anglican Church located on the height of land at the south end of town which was built in 1862. It was expanded in 1885 and in 1897 a tower with bell was added.  Rideau Canal Info

The Smith’s Falls News in 1837 reported a case of smallpox at *Oliver’s Ferry in 1837.  In that year an Irish woman with two daughters aged 12 and 13 were put off at the ferry from a steam boat.   Many settlers came as far as Brockvile, then walked north about twelve miles and then west to Portland where they were transported on the Rideau to Oliver’s Ferry, coming thence to Pert
#006032-86 (Lanark Co): David WILSON, 23, blacksmith, Almonte, same, s/o Hugh & Mary, married Lizzie CHURCHILL, 23, Portland – Leeds Co., Perth, d/o William & Melissa, witness was Albert LANG of Almonte, Nov. 2, 1886 at Perth.

Was it the Germans Or UFO’s that Invaded the Ottawa Valley in 1915?