I bought the book “Pioneer Sketches in the District of Bathurst” as the letters in the Thomas Alfred Code journal I am transcribing were written for the author of the book mentioned above by Andrew Haydon. There was supposed to be a Volume 2 which never happened. I found this letter today in Haydon’s book and he spelled the writer’s name as: “Miller” and much as I tried could not find any mention of him. Now I know now that it was spelled “Millar” from family memories below.

From William Millar to his father Lanark-on-the-Clyde

I have got my land and everything as was said. My farm is 20 miles from this town and 5 miles from Lanark Township. It is in the township of Dalhousie, No. 14 in the 2nd Concession. I am just going off on Monday to build my house. It is a nice lot of ground, and I have 10 acres of hay on it. If I had been here two months sooner I would have had a cow this Winter. If I have time I will cut some hay yet and get a cow, but this I cannot say until I get my house. Two pounds a head is just we paid from Quebec to the Perth Government settlements. In this town, there are six or eight large stores where you can get anything, as you or I could in Glasgow, but cast metal  is very dear and crockery wear.

It has only been four years since the town of Perth was a wilderness of wood. There are four churches in it and the distance from my farm to Quebec is 409 miles. I intend to keep my family in Perth until I have my house up and provisions for them. The winter beef is 3d a pound; tobacco, 15:30 a pound; rum 15 a bottle. When you write to me, direct it to William Millar, farmer No. 14, 2nd concession of Dalhousie, by Lanark. I have called my farm Whitelee, but it will not be known by that for some time. My friends need not come here, but for farming. No tradesmen is wanted mostly at all.

We came from Quebec to Montreal in a steamboat, and a land carriage from that to Lachine, and from that in boats to Prescott, and from that to Perth in wagons and such horses for running I never saw in my life. I got my wife family and baggage on a wagon and I thought when they started that the men were made for as they went off like a shot out of a gun and up hill and dale was alike.

They were most of them farmers, and I told the man that was with me, that if I were to run our horses that way we would kill them, but he said to have no fear of them. They are the most mettlesome creatures I ever saw. I can tell you, and you may tell all you know, that my wife bakes loaves as good as the best risped loaves in Glasgow. I thought I would miss the Oatmeal greatly , but I do not. If you come get into some society– a great saving.

A pot which you can buy there for  4 shillings will cost you 2 pounds here, and a kettle costing you 6 shillings costs 2 pounds here. Pots and pans be sure to fetch, and a grindstone. A set of tea dishes which you can buy for 3 shillings will cost 1 pound here. A 4s.6d dollar is 5s. here, and one of your shillings is 13d., and your farthing is 1/2d. and a penny piece the same. Everything you have if it be the shape of copper, goes for 1/2d. I have gotten 2 pounds this day, and I got as much this day three months ago and as much in three months after that, and I get farming utensils of every description that I need. Thanks be to God for being so fortunate as I am. I got information this day from Captain Marshall how I will get you out free of expenses, and if I get this for you I think I shall be happy. This I write, if I get it for you, how you are to do.

The following genealogy of William Miller who wrote the letter may be of some assistance. William Miller  and Margaret Burns, Dalhousie, arrived 1820, Con 2 Lot 14 was followed the next year, 1821 by his parents William Miller and Elizabeth Gilmour who settled on Lanark Township, Concession 1, Lot 15. They were just two of four William Millers to settle in the area in this time. As you will note, there are two William Millers in later generations that I have not documented that May be the William in Kincardine. I will check this out later today. Can’t imagine why I have not yet documented them! Please update this info as it is perpetuating misinformation. I will do my best to get the later William info to you asap.

Linda I believe that William was born earlier 1789 and he was married to Margaret Burns. His father and brothers came in 1821 and settled nearby. He was my 3rd great grandfather and ended up in Racine WI.

It’s been a busy day! Just wanted to follow up on my comment on your blog. Dad and I worked for years to identify the William on Lot 14 Con 2 Dalhousie. Our William, born in 1786, was finally identified as ‘the’ William who wrote the letter. There were at least four Williams to arrive in 1820-21 and I have a file on each of them…somewhere. I am currently finalizing an update to a file on the descendants of William and Margaret Miller and will be posting the genealogy on a site I have set up for that purpose. Once I have tracked as many descendants as possible I plan to write their story. In addition to that, I want to track the children of ‘William Miller” and Elizabeth Gilmour his parents who settled nearby in Lanark Township. His brothers also settled nearby. Dad focused on the males in the family and I am trying to document the story of the women as well. This is a slow process but I am seeing an end point in the near future for this family.
However, there is some tantalizing info in your post. At the moment I show a relationship to the Smith family via Robert, a brother of William, of Lot 14 Concession 2. Their father was the William Miller m to Elizabeth mentioned above and lived on L15 Con 1 Lanark.
I still have unfinished work re the William in Kincardine and will turn my mind to that shortly and keep you posted.

“I discovered the book, ‘Pioneer Sketches in the District of Bathurst,’ [by AndrewHaydon, Ryerson Press] on Oct. 15, 1955. It contained this letter written by my great grandfather to his father in Scotland. The book is in an old library at Watson’s Corners, [Dalhousie] Lanark Co., Ontario. The Lot No. 14 Concession 2, Dalhousie Twn. is where my grandfather was born. I visited it for the first time in October 1955, and found all the buildings gone from the place.”


Here is her Grandfather

“He is active in the promotion of agricultural interests through various societies, and lends his influence in a general way to all enterprises of public benefit.”

When Mr. Millar came to this section, his entire worldly possessions consisted of two or three small tools in common use, a yoke of oxen, and less than $1 in money; and in order to procure food he went all the way to Durham with grists for the neighbors “on shares,” the trip occupying from seven to ten days. He now owns 300 acres of fine land, and is one of the leading farmers in the community, carrying on an extensive cheese manufacturing business in addition to his farm.

Mr. Millar never sought public office, though he has been a Justice of the Peace for very many years. He is active in the promotion of agricultural interests through the various societies, and lends his influence, in a general way, to all enterprises of public benefit.”

Belden 1880 Atlas of the County of Bruce 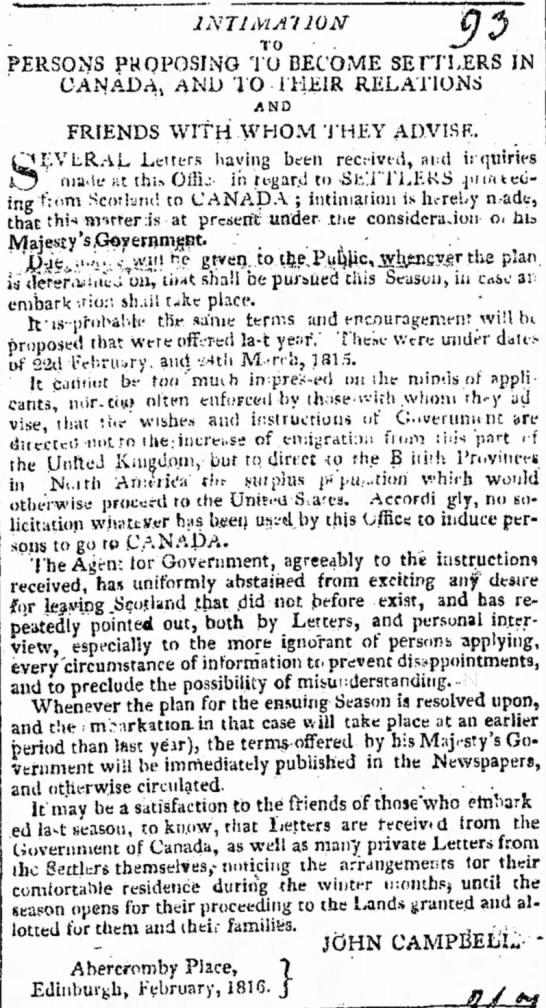 “They were Set Down in Dalhousie Township”– Effie Park Salkeld

The Story of Wild Bob Ferguson of Dalhousie Township