Franktown Past and Present

Near Franktown I first saw the light,

And Franktown still is my delight,

Yes,though its sliding down the hill,

The dear place, I still love it still,

Unrivalled spot to muse and think,

And make demands on printer’s ink,

Descriptive of the olden times.

This village saw a lively rush,

When Ottawa was still a bush,

Stage coaches crossed from far and near,

Were vocal far into the night.

With song and glee and rustic dance,

Toned with ‘scrap” or two perchance,

A jolly frolic place as yet,

For then the village still was wet.

Made tidy little fortunes then.

Labourers had enough to do:

Good wages for their labour too.

Mechanics, artisans and such

Hard work enough if not too much.

The cooper thumped his barrel tight:

The brisk shoemaker pegged away,

More than a dozen hours of the day.

All were busy then as bees,

Until the railway banished these.

The engine crushed the Village legs,

Much as the housewife mashes eggs,

And left it moaning night to death,

With feeble pulse and gasping breath.

O for the golden days of yore!

The Church was crowded to the door,

To Franktown. sixty years ago.

The Ring–Behold it as you pass,

Sodded, and coated o’er with grass!

He halted at no other town:

All mustered here to see the clown,

And lots of other things that tickle fancy,

As for fairs on village green,

This match could nowhere else be seen,

One deafening din of bullock roar,

Buyers and sellers by the score,

None stolen– rare indeed was the sight,

And yelling “Howld Me” or I’ll fight!

Another striding to and fro,

With chip on shoulder–don’t you know!

Yonder a maniac raves and rants,

With nothing on him save his pants!

A wild mob seething round and round,

Meanwhile away from row and noise,

Apples are sold to girls and boys,

One big one for a penny or two,

If rather small for one to do.

The buyer settles and departs:

And swollen pockets. Night settles in.

And ends the fair, the fight, the din.

Those days are gone.

Those days are fled,

Not hers the fault, her sons are grand,

Her daughters best in all the land!

Yet she droops and fades away,

Sad contrast to her early day.

No Amburgh now unfolds his tent,

No tavern rings with merriment.

The fair of all its splendours shorn,

Two doctors? No! Not even one,

In the still necessary store,

One customer for ten of yore,

The streets are silent as the grave:

The whole place darksome as a cave.

The houses stand; but on the street,

You’re startled if a face you meet!

The Agent now avoids the place:

Seldom a stranger shows his face:

The traveller likes it not a bit–

No place to eat, or sleep, or sit!

No provender for man or beast.

Where once* was spread a ducal feast!

Wayfarers give it the ‘go-by”,

For Franktown, once so wet is now dry.

A place of placid sweet repose,

What a retreat ‘twoud be for those’

On wrecked on bestial seas of sin!

The monk bevowed to silence keep,

The sluggard, wed to sloth and sleep,

The hustler in his mad pursuit

Or gain, or other Dead Sea fruit,

Dwindling existence to a span:

All, whirling furious and fast

Come, one and all, and sit with me,

Beneath this spreading basswood tree;

And rest, and sleep, and happy be!

For, be it clearly understood

This wild oat place, at last, is good.

*The Duke of Richmond slept a night and had his meal at the old Burrows hotel on his way from Perth to Richmond. Read The Haunted Canoe from the Jock River and The Franktown Inn

Franktown was nailed to the glade, and though it never reached the glory painted by the noble imperialists. It has never forgotten that Van Amberg’s Circus bivouacked there one day because both Perth and Carleton Place were too small affairs to entertain so massive an establishment.  It was probably also on the same trek when the Duke of Richmond was bitten by his pet fox and rabies developed and he slipped away and was drowned in the river as he sought to quench is burning thirst. Well that’s what the fox said.  Read –How Franktown Got Its Name and  Meanwhile Back in Lanark Village

Indians who had camped for the winter at Franktown, selling baskets through the district, struck their tents and returned to the St. Regis Reserve

Mrs. Jas. L. McArthur presented a Bible and Mrs. Allan Cameron three plush chairs for the pulpit platform.  The speakers of the evening were Rev. Dr. Crombie and Rev. Mr. Cooke of Smith’s Falls, Rev. John May of Franktown, Rev. Paul Pergau of Franktown and Revs. Woodside and Scott of Carleton Place

Sunday, September 23, 2012″…And Franktown Still is My Delight” – A Sermon for the 190th Anniversary Celebration of St. James’ Anglican Church, Franktown, ON 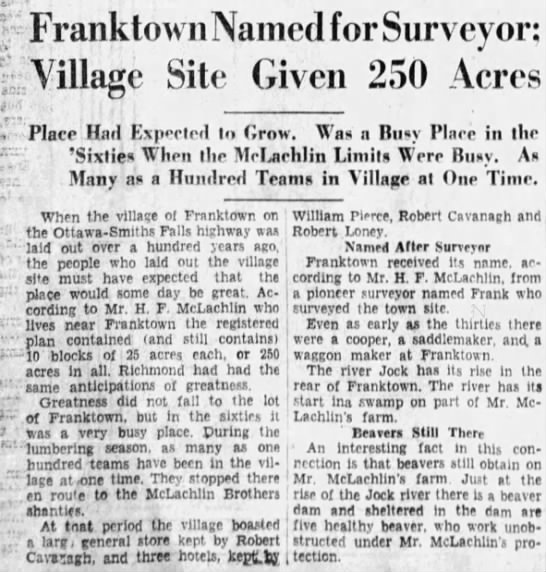 The Thomas Alfred Code Journal – Letters-Part 12- Code Family–“Had I the course to go over again I would evade outside responsibilities beyond my share, even if it cost more”

The Thomas Alfred Code Journal – Letters-Part 19- Code Family–“Michell was never known to have any money, excepting at or after tax sales”