In May of 1910 a homeless, penniless, and a cripple, having recently lost his leg in an accident. Michael Casey, aged 73, who for thirty years lived on Waverley Street, Ottawa, was put off the Brockville train on a Saturday night, having been sent by some person against his wish, and promptly sent back by Chief of Police Burke, of Brockville. .

He was found in this condition by Chief Edwards of Smith’s Falls yesterday morning having remained at the station all night. Fortunately the girls at the restaurant had taken a pity on him, and supplied him with food. Chief Edwards was at his wit’s end to know what to do with the old man as he has no friends or relatives. It was decided to put him in the council chamber, where he was asked for an interview by The Journal representative.

When asked who sent him to Brockville, he replied that he had been in the St. Francis Hospital ever since his leg was amputated in October. On Friday night, he said, the authorities at the hospital gave him a choice of Perth, Renfrew or Brockville to be sent to, but as he had no friends in any of these towns he did not know where to go. When pressed, he decided to go to Brockville, but he had no reason whatever for this decision.

Upon arrival at Brockville, Casey said that Chief Burke was sent for, who stated on learning that he had come from Smiths Falls.

“That’s where you got your accident, and there you must go back,” and on the same night, this poor old man, suffering with pain from his leg, was put on the train to Smith’s Falls. Tears streamed down his cheeks as he spoke of his life in Ottawa, where he has a daughter. Asked why he did not return to Ottawa, the old man shook his head. He once owned some property In Ottawa, he said to pay for which he borrowed money from the late ex-Mayor McDougall, but owing to a severe attack of rheumatics he lost everything. That was three of four years ago.

The Journal representative asked Casey what he intended to do. He replied that he would enter an action again at the cabman who caused him to lose his leg last September. He states, he was standing at a railway crossing when a cab came along, the hub of which took in his trouser leg, throwing him violently to the ground, His leg was later amputated at the St.Francis Hospital. 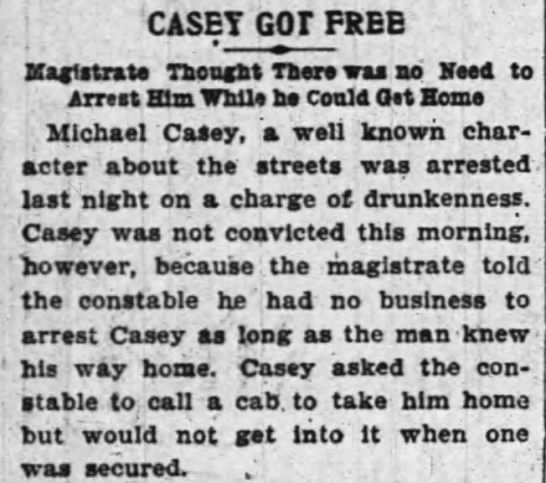