I was so foolishly prone to meddle in municipal squabbles and politics. I was mayor of the town of Perth in 1889 and 1900. Had I the course to go over again I would evade outside responsibilities beyond my share, even if it cost more.

Shanty lunch given by Mr. T. A. Code at the Links O’Tay Golf Club, October 3rd, 1908. —Perth Remembered--see the description in “History”

I also had to do with the development of the Perth Golf Club, which would make quite a story in itself running over 30 years. Then too, I had to do with the initiation of our park system, the Perth Club, and swimming quarters awaiting further development. I played Cricket on the Governor General’s grounds in Ottawa in the 1880s.

After the difficulty of living a long life: the mills and property responsibilities have increased– they have to be kept alive, if not they have little value–to retire seems like waiting to die. The time is in sight when I will have to relinquish– I think I can see it now, coming over the hill around the bend.

The leaves of a wild plant called Lamb’s Quarter furnished greens for the table and are quite as good as Spinach, but it is difficult to obtain it clean owing to the fly or blight. Dandelion and Basswood Leaves were another substitute for the Spinach of today.

The blossom of the Ironwood Tree were used as a substitute for hops.

The heads of Cat Tails were beaten into a wool or fluff and used to fill the mattress.

One of the weekly tasks was to string and fill say a barrel candle mold– and in the absence of a candlestick, touch a match to the bottom of the candle and stick it on the bottom of a saucer plate.

Unfortunately the records from the granting of the patent in 1825 up to 1835 where Innisville is situated is blank. Suffice to say the primitive methods prevailed in the grinding of grain and sawing of lumber. The latter was done with a Cross Cut Saw. The log was part of an elevated platform with a man on top and one underneath. Shingles were split from cedar block and were said to be more durable than sawed.

The Flail was the sole means of threshing grain. The writer has wielded it as it was used in the 1860s in the absence of the Bull Thresher. The Flail consisted of two sticks, like a sleigh stake. These were about 5 feet long each, and were connected at the ends by a thing which might be of leather or rawhide. Thus ————–0——————- . This was swung over the head and brought down on the the straw with great force. The reaping hook was the sole instrument for cutting the standing grain until the Scythe and the Grain Cradle came in. 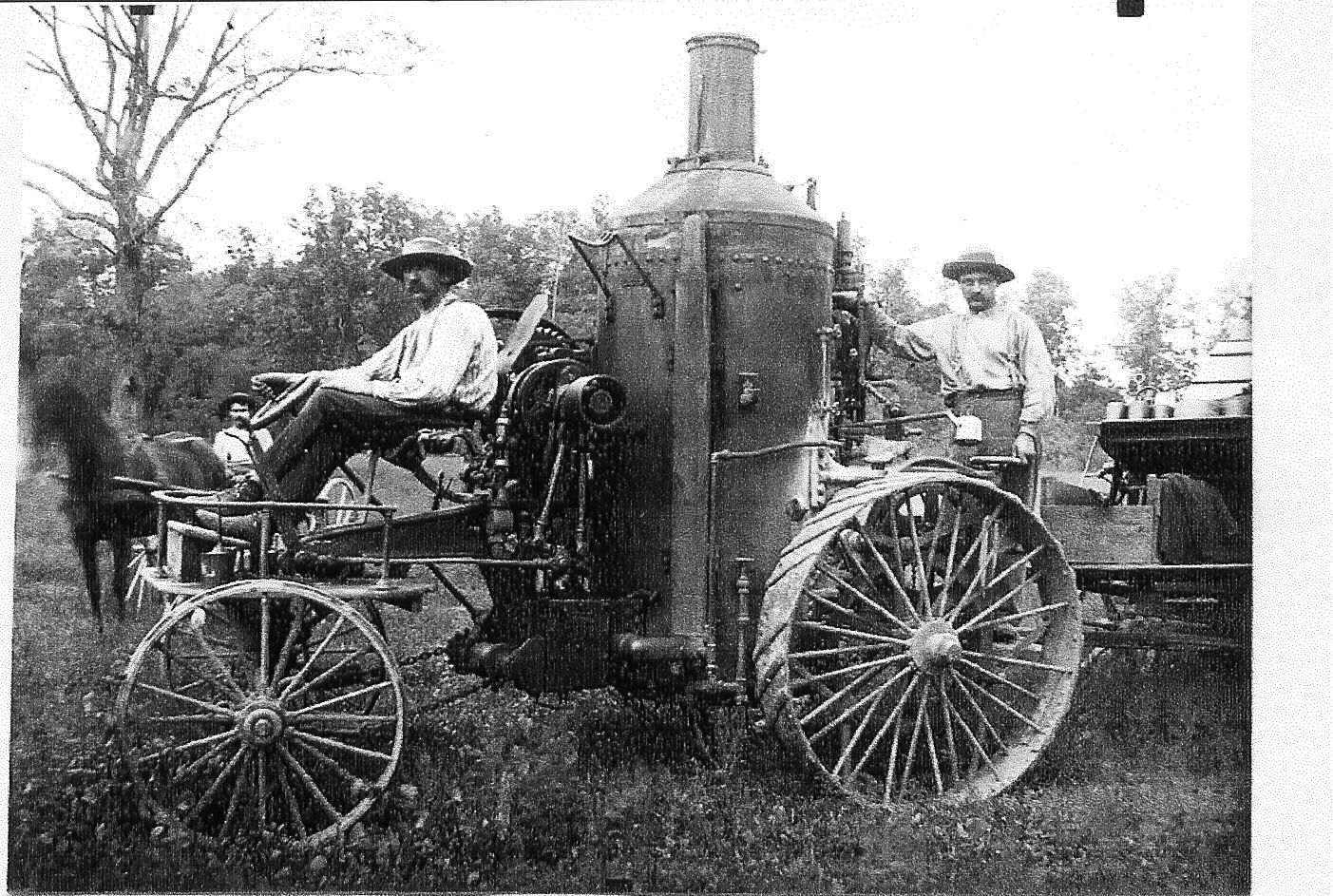 The Bull Mill Thresher consisted of a tooth cylinder as in use now, but without a separator. Later the separator followed. The separator with a fan was introduced– followed by a blower that blew the straw and chaff to the stack mow or where required, thereby reducing the dust nuisance.

The people grew more grain in the early days as I remember buyers who would have five to six thousand bushels of oats in the warehouse and the same in proportion to other grains. The increased cost of labour, the hogs, cattle, and dairy interests appealed to the farmer and it is unfortunate now that much of the grain feed is brought in to supplement that which is produced on the farm. The farmer complains he cannot pay a laborer, mill wages all the year, and the laborer, objects to long hours during the busy season. Consequently the farmer is compelled to produce such as he can with his own labor.

Next- The Innisville School Centennial 1928

*Lamb’s quarters, fat hen, or goosefoot,  was an introduced weed which is one of the plants my Grandfather Crittenden talked about eating when he was a kid, though oddly, no one in the family ever fed it to me.  My Grandmother would point it out when it was growing in her flowerbeds, and pull it out. Grampy Critt claimed not to know that much about edible wilds, but get him talking and quite a bit came out.  Some folks used to call it “Poverty Food”.

Note—When the post office opened in 1851 a clerical error resulted in the community being called Innisville. The error was never corrected.

I purchased this journal online from a dealer in California. I made every attempt to make sure the journal came back to its rightful location. Every day I will be  putting up a new page so its contents are available to anyone. It is a well worn journal full of glued letters and newspaper clippings which I think belonged to Code’s son Allan at one point. Yes there is lots of genealogy in this journal. I am going to document it page by page. This journal was all handwritten and hand typed. Read-More Local Treasure Than Pirate’s Booty on Treasure Island

Andrew Haydon–He was the author of Pioneer Sketches of The District of Bathurst (Lanark and Renfrew Counties, Ontario) (The Ryerson Press, 1925) and Mackenzie King and the Liberal Party (Allen, 1930).