There are about 6 huge pages about Innisville written by Thomas Alfred Code so I will do this in parts. This is 4d

I think the country schools in the early days were quite as good as today (1929) for all practical purposes. We were schooled in the three “R’s”; the common subjects: Latin and Greek roots, also in prefixes and affixes. Our handwriting was better than that of today, which can be proved by reference to the early county records. The headlines on our copy books were quotations from some standard authors, such as : “Honesty is the best policy” or “Many a shaft at random sent hits the mark the archer little meant”. After writing these and many others twenty times it was a dull mind that would not retain them, to be applied in conversation later in life.

Pupils were numerous in those days, and the teachers were of high standard. Let me mention Thomas Carswell who was still living in Carleton Place in 1929, John Arthur Houston, later of Toronto, James A Stewart who passed away in Winnipeg, and William Hughes of Innisville. Together with several able female teachers they were a formidable group. The salaries then were not attractive, three to four hundred dollars, yet an old teacher told me that he seemed to have more money then than now with 10,000 dollars.

The offending pupils were frequently sent out to cut a switch, perhaps to chastise themselves. Many of us, however, have been cutting gads all our lives to whip ourselves.

Reading matter was scarce. The Carleton Place Herald– edited by the late James Poole, furnished the news, and strife followed on its arrival as to who should get the first reading. Few of the lines were left unscanned.

Even with the early opportunities for schooling, coupled with the home opportunities of today, and a practical knowledge pf work and what it costs to earn a dollar, a person, if ambitious, should get well to the front. I do not refer to the professions, but taking the years spent in going to our higher educational institutions a graduate is not looking for a practical pursuit, rather for a position, not a job. I except law,medicine, science, engineering, etc. I think most young men at present time take the load too late in life.

We did not have gymnasiums. Are we not destroying self- endeavour, self-help and ambition, in all we are doing in making the path smooth for the rising generation? Our physical exercise was hard work, skating, fishing, and a hand spring over the fence. We had a form of baseball as now, but you did not have to touch the base runner, but throw the ball with all your might and hit him between the bases, or wherever you could. If you hit him this was out–also, ‘over the fence”– and perhaps the runner was out of running for the day.

For social amusement we had our penny reading and spelling contests, concerts, singing schools and debating societies. It was all local or country talent. Mostly everyone could do something to entertain, some in a dramatic way, some as singers, readers, musicians, and in many other ways that cost but little. Our young people today were not schooled in those arts– if I may call them such. They get their entertainment and individuality in the picture shows– everything ready made.

Then we had our corn husking and apple pairing bees, followed later in the evening by dancing to the old jig time. Oh boy! How we did hoe it down! The boys were good step dancers: they developed it by practising on the barn floor on rainy days when not off fishing.

Again in the village the cattle fair was an event to which everyone looked forward. The cattle were  bought mostly by Ottawa buyers and driven to the city, as this was before the old Canada Central was built from Carleton Place to Ottawa.

Four mile courses were plowed on the ice between Innisville and Ferguson’s Falls. A horse that could trot the mile in three minutes or less was some goer! The sport is dead today!

I have a faint recollection of the logging bees and barn raisings where men strived to keep up their end, and many stories are told of the gallons of proof whiskey needed necessary for the occasion. This commodity was purer than no doubt, and cheaper, but it had the kick; about 2S. 6d a gallon, or 7 1/2 a quart. It was many years after the decimal currency was introduced before it came into general use– the people seemed to figure on the old lines.

Next instalment: Game, Fish, and Fruit 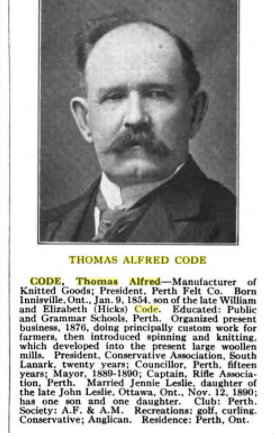 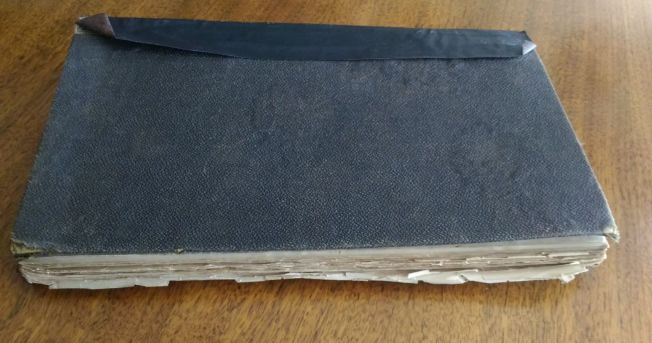 I purchased this journal online from a dealer in California. I made every attempt to make sure the journal came back to its rightful location. Every day I will be  putting up a new page so its contents are available to anyone. It is a well worn journal full of glued letters and newspaper clippings which I think belonged to Code’s son Allan at one point. Yes there is lots of genealogy in this journal. I am going to document it page by page. This journal was all handwritten and hand typed.

Andrew Haydon- see bio below–He was the author of Pioneer Sketches of The District of Bathurst (Lanark and Renfrew Counties, Ontario) (The Ryerson Press, 1925) and Mackenzie King and the Liberal Party (Allen, 1930).