Causing wide regret among his many friends and associates. In Perth, Lanark County, the death occurred suddenly this afternoon of James J. Hands. He was a prominent resident and former Mayor of the town. Mr. Hands had made preparations to take a bath at his home and, it is presumed he took a heart attack and fell in the water-filled tub and drowned.

Mr. Hands housekeeper discovered the body and Dr. H. C. Hagyard and Dr. J,F. Noonan were called and after working for some time failed to revive Mr. Hands. It was known Mr. Hands had been troubled with a heart ailment for some time but news of his tragic death came as shock.

Prominent in municipal affair for many years the deceased served as councillor. Deputy Reeve and Mayor as well as taking an active part In bettering conditions In the town. Born in Drummond Township, 71 years ago, he was a son, of the late Thomas Hands, who represented represented Drummond Township in the- the- County Council for 26 years.

His mother was the late Caroline James. Mr. Hands received his early education in the primary schools of Drummond and later at the Perth Collegiate Institute. After operating a farm for eight years, he moved to town where he was engaged in different commercial commercial  areas.  After his debut as a councillor, he soon received the nomination as deputy – reeve, serving in that capacity for four years.

During the World War, he was first elected Mayor of Perth. After 19 years out of municipal life he was again elected to the Chief Magistrate’s chair, receiving an acclamation for six . successive years. He retired from public office in January last.

Active in fraternal circles, he was a member of the I.O.O.F., True Britons lodges, A.F. and A.M. and Beckwith Lodge No, 7S8 L.O.L.  He was also a member of St. James’ Anglican Church.

Surviving is one-sister, one-sister, one-sister, Mrs. W. A. Armstrong, Perth, and one brother, W. T. Hands, of Drummond. Out of respect for deceased, the flag on the Town Hall and county buildings were lowered to half mast. The funeral will be held on Wednesday afternoon from his late residence to St James Church and Elmwood cemetery. 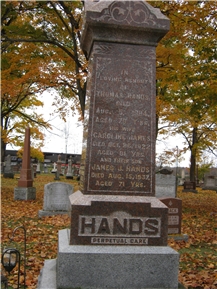 Big Parade in the Morning and Speeches – and Doings at Night about 6:30 o’clock Monday morning Perth wakened to the tune of bells and whistles blowing and while many could hardly realize that peace had arrived, it was nevertheless quite true. From then on the main streets were crowded with people. Throughout the town flags suddenly appeared on stores and houses. Motor cars were gaily bedecked with flags and bunting and by 8 o’clock the noise was coming from many quarters – horns, bells, tin cans, etc., were lustily plied. Early in the morning Mayor Hands proclaimed a general holiday, and announced the the parade would be held at 9 o’clock, by assembling at the town hall.

It was 9:30 before the parade got started, however. The Band led, followed by pupils of the schools, the town council and clergy on a tally-ho, and then one long line of motor cars numbering over two hundred, with all kinds of decorations and every car loaded to the limit. Some of the motor trucks seemed to carry almost impossible loads.

The parade proceeded from the hall eastward along Gore street to Brock, across Brock to Drummond and down Drummond to Mary street, across the street to Wilson and from there on to Foster street to Gore, and down Gore to the hall again, when the speech making took place under the chairmanship of the Mayor. The speakers included the clergy, Rev. Dr. Scott, Rev. Thos. Brown, Rev. W.M. Grant, Rev. D’Arcy Clayton, Judge Scott, J.A. Stewart, M.P. – F.W.Hall, M.P.P. – Boyd A.C. Caldwell, C.J. Foy and three retuned soldiers, Sergt. Wm. Wright, Flight-Lieut. Allan Code and Pte. Jewitt.

All the speeches conveyed words of rejoicing over the downfall of the Kaiserism, with the hope that the future might benefit thereby. Each speaker was lustily applauded by voice, horn, bell and other noise making instruments including the central fire alarm. It was a day for rejoicing and there was no lack of it. The program was closed with the band playing the national anthem. In the afternoon there was an abundance of motor cars running and no lack of noise.

Shortly after seven o’clock the band marched to the corner of gore and Foster streets, followed by what was known in days past as a torch light parade; the paraders all carrying torches and “did up” the main streets for upwards of an hour, led by the fife and drum most of the time. Three bonfires on Gores street served to make some conflagrations during the night, and incidentally disposed of many stray barrels and boxes. The motor cars were equally as numerous at night and the people also, as in the daylight hours. Many concluded the day’s rejoicing at the dance in the town hall, arranged for during the day. All were agreed that Perth did its share towards commemorating what will in future be one of the most important anniversary days of the year.