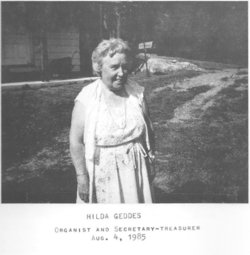 John A. Geddes was born near Elphin, on the Maberly Road, one of the younger sons of Ebenezer Geddes and Catherine Ferguson. The family moved to Snow Road while John was a very small child and he remained there for the rest of his life. In 1904, John A. married Blance Allan.

For a time Mr. Geddes was employed as a clerk in lumber camps and then after a long bout with typhoid he purchased the General Store at Snow Road in 1912. In 1914, he became Postmaster and in 1915, caretaker/agent for the CPR station.

John A.’s General Store was the center of village life, one came here to shop, pick up the mail and to take the train. More than just a place of business, it was here that the local “Wind Jammers Club” held forth, playing checkers and swapping yarns. Mr. Geddes also ran dances in a converted store house on his property and he was an active member of the Presbyterian Church, the International Order of Odd Fellows and was for many years Secretary of the School Board.

Hilda Geddes was the daughter of John A. Geddes. Like her father she was very active in the community. She was the organist at the church, pianist at the family “dance hall’, first president of the local Women’s Institute, active in the Rebekah Lodge, and Secretary-Treasurer of the church. Since her retirement she has rented summer cottages including one built out of the remains of the old Snow Road Station.

In 1940 she entered the Civil Service in Ottawa where she worked in various departments until her retirement in 1967. While in Ottawa Miss Geddes was in little theatre in Ottawa, including receiving a “best performance by and actress” award for one of her roles.

Miss Geddes has written several books about the history of Snow Road Station and area.

The Geddes Snow Road Station fonds contains a series of yearly diaries, kept by Mr. Geddes from 1907 until 1966, that detail his life and the activities in and around the village of Snow Road Station, Frontenac County, Ontario. Towards the last years of his life, Hilda Geddes, his daughter, helped him keep his diaries; for this reason, the diaries actually record his death and events for a little time after his death. While the diaries form the bulk of these records there is also a series of business records that detail some of Mr. Geddes business activities at Snow Road Station. These include account books, a ‘letter book’ from the station and other business records.