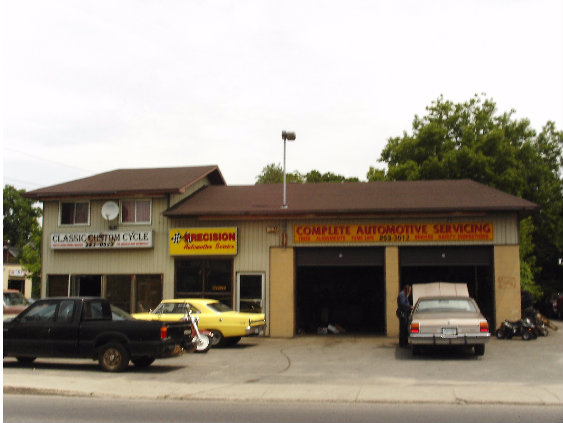 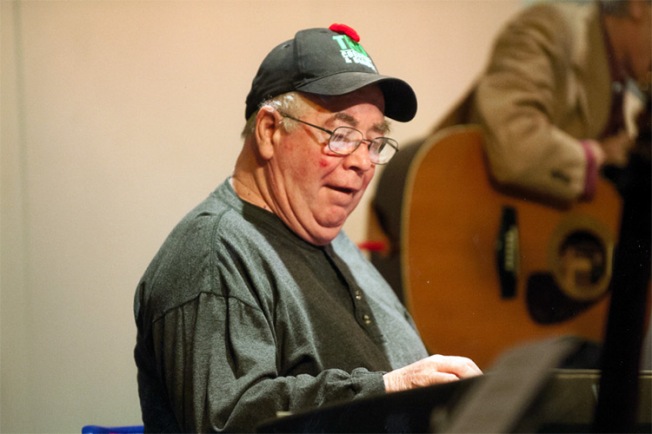 The corner lot was the Supertest Service Station run by John Dezell and his son Forest. Later Chas. Black was the proprietor. Llew Lloyd said– Good timing . When it was the Super Test garage Bernie Costello played the piano for the Saturday afternoon crowd

Ken Godfrey–I well recall Bernie sitting at the old upright piano on the second floor of the old CPCC, playing his heart out! He had put thumbtacks into its hammers, so it produced an excellent “Honky-Tonk” sound. He had great talent! I did not know that he had gone on to be so successful, as I left CP for Toronto in 1964, but did see his brother, Brian, on several occasions, as Mayor, and author of books – including “A Nursery of the Air Force” – a copy of which I have (signed by Brian).

I also recall that their father, Charlie Costello, owned a coupe automobile, with a “rumble seat” that pulled down from the trunk area. I think that was the one and only time I ever had a ride in a “rumble seat”!

Joann Voyce Charlie Black ran it before Costello. He was there in the mid to late 1940’s as our father hung out there and took us with him

Llew Lloyd  When it was the Super Test garage Bernie Costello played the piano for the Saturday afternoon crowd”.

Ted Hurdis Bernie was one talented guy ! He brought a lot of cheer to every legion , and especially nursing homes in our area

Llew Lloyd Bernie played at the grand opening of the Queen’s Hotel when Jeff Leacock bought it .

Heather Brown Fortington For years he played at the Pancake Breakfast in Almonte. The children loved dancing to his music.

Doug B. McCarten I remember the upright piano and the jam sessions but I can’t remember who the fiddler was….Do you remember Llew Lloyd?? Seems to me the piano

🎹 was right near the mechanics pit?

Llew Lloyd I’m wondering if it was Lorne Wilson. I don’t remember names, but it seemed there was a constant turnover of talent and Bernie led the way .

Myrtle I. McNeely Bernie played at our church-Almonte Baptist church- for many years! Such talent! He was family to us.

Ed Giffin–My brother Terry played with Bernie for many years around CP whenever there was a dance particularly at the Legion. Terry played the drums. I recall that Bernie lived in an apartment above or close by where your Dad had his dry cleaning business. I remember visiting that apartment and seeing an upright piano there. I had no idea at the time that Bernie had started playing because none of us kids ever took music lessons. Bernie always played road hockey on Beckwith Street with us. He always liked to play goal.

I kind of lost track of Bernie in school, I guess because they constantly moved me back and forth across town to Victoria or Prince of Wales from Central School. I don’t recall Bernie ever being in high school. I just seemed to have lost track of him by then.

I remember Charlie, his dad, worked in Clake’s Grocery store. It was located at the corner of Bridge and Albert across the street from our lunch bar.


Ken Godfrey–Yes, the Costello family lived (for a while at least) in an apartment on the second floor of the building that housed Carleton Cleaners on Bridge Street. I do recall visiting with Bernie there, and seeing a comic book that somehow had survived WWII, when they were printed in black and white only, due to the wartime restrictions on everything – including coloured ink! I don’t recall seeing him in high school either, but he may have been a year behind us.

He was one of the remaining original “Ottawa Valley Greats”.

An extraordinary musician, one of a kind and as unlikely a legend as you will ever meet. But everybody knew him as just “good ole Bernie”.

Just a local down to earth lad, a familiar face at the coffee shop and someone who just happened to be one of the best keyboard players, anywhere  ever.

For more then 65 years Bernie Costello was a fixture at dance halls, legions, hotels, pubs, concert halls, churches, (you name it) throughout Ottawa and the Valley where his unique and wonderful keyboard sounds moved one and all.

Add to that numerous tv, radio, video and recording appearances he made and it all adds up to one pretty impressive body of work. Definitely a true legacy forged in talent, skill and humility.

One could not even begin to count the number of times he performed on a stage somewhere.

That’s because quite simply, Bernie played everywhere in the Valley there was TO play and many “that there wasn’t” we used to like to say. For anywhere could be turned into a stage when it came to this guy.

Along the way he performed alongside the famous and not so famous alike. And to him they were all the same. Just another person to make music with and yet another opportunity to tickle the ivories. Something he did so wonderfully all of his life.

Bernie first played in public at the tender age of 4 years when accompanied his mother at the St. Andrew’s Presbyterian Church in Carleton Place. Fifty years later (2007) a special tribute was held in that same church where a jam-packed house gathered to celebrate a lifetime of musical achievement. The evening was hosted by his late brother, Brian (former mayor of Carleton Place) and three special “Lifetime Achievement Certificates” were presented. The Town of Carleton Place, The Town of Mississippi Mills and The County of Lanark each came up with a “special” document for him because (if the truth be known) no such “official” recognition exists.

In other words: for him, they made it up.

Aside from performing, Bernie spent years teaching the gift of learning to play music to others as well as operating his own music store for a time. He was well known for his ability to repair musical instruments, equipment and such and eventually restoring musical instruments became a huge passion for him.

Bernie often said, “in this country a musician has to be able to diversify if he/she wants to make a living in the music business. There’s just not enough work for most players to earn enough from just doing gigs alone,” he explained.

He began his professional career backing up Valley fiddler Lorne Wilson in the 1950’s and went on to form a group with Lorne’s son Lloyd in the 60’s. Soon he was getting noticed and was often asked to back up everyone including Nashville greats like Lynn Anderson (“Rose Garden”) and Leroy Van Dyke (“Just Walk On By”) and would be hired to back them up when they did shows in the Ottawa area. He also worked with legendary Valley performers such as; Mac Beattie and the Ottawa Valley Melodiers, Ron “The Fox” McMunn, Ward Allen and so on (basically “everybody”).

In the 70’s he did extensive work with Dave Hurley & Company as they were a mainstay at Molly McGuires Pub in Ottawa which was one of the most famous night clubs in the country at that time. He was often invited to represent the Valley at special performances in Toronto including, The Good Roads Convention (Royal York), on the train along the way and at Ontario Place.

Bernie was the personal choice of famed Ottawa heart surgeon Dr. Wilbert Keon (founder of the Ottawa Hospital Heart Institute) as his piano player for the annual charitable dinner the doctor hosted at the Chateau Laurier Hotel in Ottawa.

One night about 15 years ago, while on stage alongside him, it hit me. “I’ve had the honor of playing with one of the best piano players there is for years now” and began to weep right then and there on stage. I couldn’t help it. (Come to think of it; can’t imagine what Bernie thought) Actually; he knew..because I told him.

Man! We rode oh so many miles together over the years going one place to another. We shared many things and witnessed the changes in seasons, years and life.

And, in each other.

Still; there were many parts to him that I never got to know. But I knew they were there. Forever now remaining a mystery.

Something in his look or his tone of voice at times.

And if you can follow this: “something” in his playing.

Yes; Bernie was remarkable but to me it is far more a personal thing. You see, I can forever say that I had the honor and privilege to have been able to play music with him (on and off) for more than 35 years.

But ever more meaningful and satisfyingly is the fact I can truly say that Bernie Costello was my friend.

Some of the Carleton Place Local Lads- Flynn Costello and Cornell