When the Carleton Place Canadian closed down, Jennifer Fenwick Irwin, curator of the Carleton Place and Beckwith Heritage Museum rescued boxes of photos from the basement of said newspaper. These photos were going to be thrown out, so thanks to her we have about 1500 black and white photos from the mid 70s saved- but they are not documented to ‘who, what, where and when’. Last year I did maybe 50 of them and this year when I offered to look for  Carleton Place Canoe Club photos– I decided now was the time to do it as none of us are getting any younger–especially me.

So each time you help identify a photo it is a godsend, now we can put the name to the face for future history. Thank you.

Tom Edwards identified this gentleman as Art Nesbitt. Tom also said he was a great guy and was the Chief in Beckwith for quite a few years. He also sold honey.

Joan Stoddart Art lived on the ninth line with his sister Frances.

Donna Mcfarlane Beverley J Wylie Frances had a bridal shower for me when I got married in 1964, She had all the neighbours at one of her cottages she is on right in this picture. I remember when their father Fred was reeve of Beckwith-cannot remember the year but i believe it was the year that the ninth line was paved from Blacks Corners to the swamp. 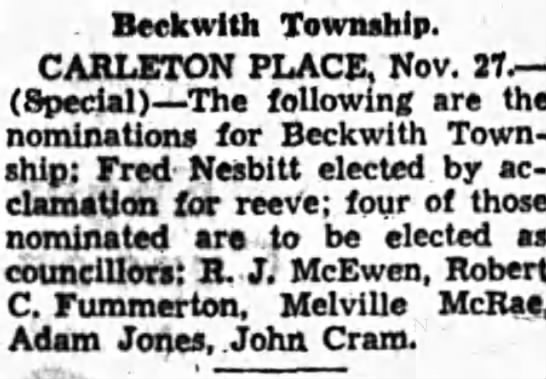 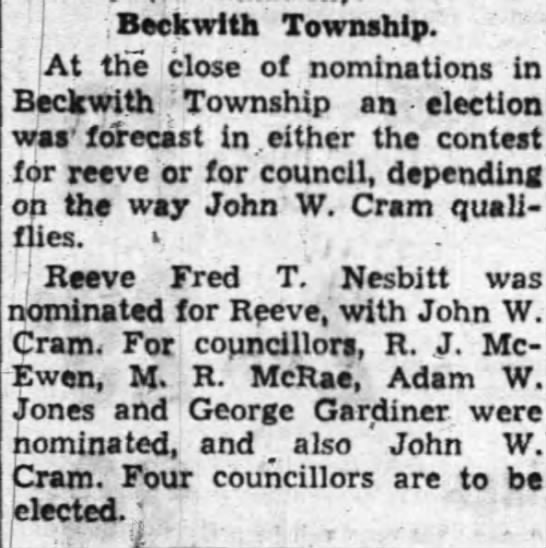 Beverley J Wylie Thank you Donna Mcfarlane..yes she was at my wedding in 1966 and I still use the cake plate she gave us…we also lived with our first born in that cottage for a short time before moving into our new place…great memories.

Donna Mcfarlane Beverley J Wylie Before Beckwith fire dept got pagers, Frances was one of the ones that telephoned the firemen. It was in the days of party lines, and they were on same line as we were, so if her phone rang during the night John got up and dressed to go and I listened in on her call lol… so he was often out the door before his call came in.

Donna Mcfarland–– that picture was taken at Eva Nesbitts (Mrs John Nesbitt) 80th birthday.
Donna Mcfarlane —One of our original members from 1964 when dept started is still active in the dept..Gary McEwen was in high school when he joined.
Ben MacRae I remember going over to Arthur’s house with my dad to pick up the honey that Arthur gave us for keeping some of his bees at our farm. I was always wanting to snoop around the old family house that sat vacant for years after a fire, I believe. I also remember seeing that house once it had been restored. If I remember correctly the house was restored by Mrs Scullion and Arthur lived in his own house on the property.
Donna Mcfarlane— Mrs. Scullion who bought the Nesbitt farm has a lot of information and old pictures on the Nesbitts.. one picture in particular that she has shows a bunch of men standing in front of the old stone house..there appears to be a woman sitting on the step with a dish on her lap.. Arthur said there was no woman there… I always felt that house was haunted and Arthur agreed. 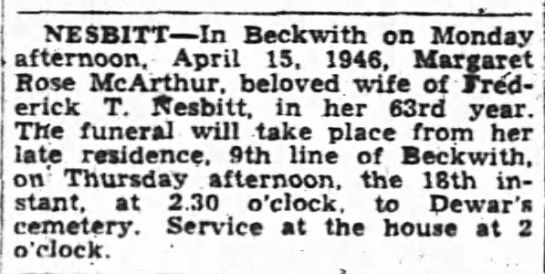 The House of Daughters –Stonecroft House