Shane Wm Edwards said: There was a story once that MacDonald was on the train to Ottawa but got off in Carleton Place to get a drink at the nearest hotel then missed the train and had to wait for the next train and while drinking he regaled the other customers with the speech he intended to give in Ottawa on Dominion Day. Perhaps this is the source of that story?

Today I found this… “A Legion of good looking girls?”

Base of Photo fromVirtual Reference Library 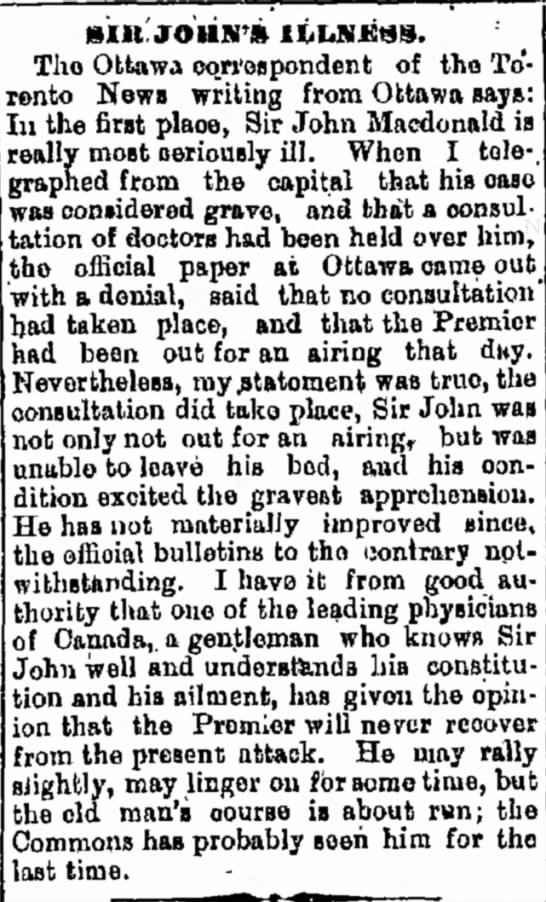 In 1897 architect George White had a vision of a Richardsonian Romanesque style building for the Town Hall of Carleton Place. For a mere $26,000 he built the breathtaking structure to include a wonderful concert auditorium with a ceiling of pressed metal. Not only was there mosaic encaustic flooring and fancy woodwork, but the Council Chamber was often called the “Red Chamber” because of the fine pine woodwork with a red satin finish.

Sitting on the south shore of the Ontario Mississippi River this building of beauty also held its silent mysteries. There were whispers of a secret window and of course the Carleton Place jail existed in that very building until a new one was built on Coleman Street.

Long before the Town Hall was built, a servant girl at the Leland Hotel, Sarah Marselles, was killed in October of 1873. While attempting to retrieve wood for the stove from a wood box, she inadvertently bumped a loaded rifle which discharged, killing her instantly. Some say a female shadow wanders the Town Hall park at night. Did Sarah find solace in the darkness of this heritage building, or did she just need to hear the peaceful flow of the Mississippi River to calm her soul.

Some visitors have reported the feeling of being watched and there is the odd cold spot and freak gust of wind within the building. There is no doubt the spirits of former prisoners still drift around the corridors of the building seeking some sort of peace. But in reality ‘aren’t ghosts like true love? Everyone talks about them but few have ever seen.’ Maybe they are just running up imaginary stairs for an eternity only to find there will be more to climb to seek what they are looking for.

The auditorium has hosted such notables as Sir Wilfrid Laurier, who spoke in the grand hall during the country’s 1911 election. The town hall was packed that night and ONLY the women that had set up the refreshments and cleaned for the event were allowed to sit in the upper floor and watch the speech– as long as they remained quiet.

M,y how things have changed.