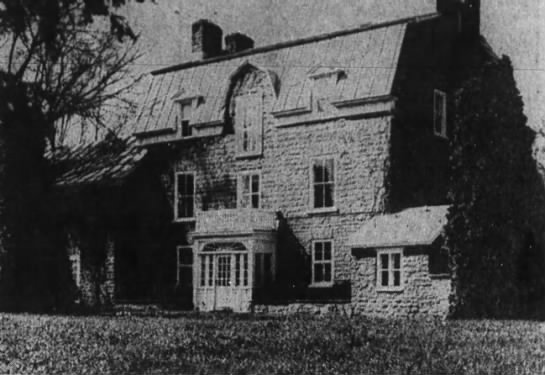 Wylie who by 1849 was a legislative Councillor for Canada came to Perth in 1820 and opened a mercantile business. In 1822 he moved to Ramsay Township and built a log cabin, which was one of the first homesteads on the banks of the Mississippi. As a Scotsman he did not waste nary a thing and that original log cabin was incorporated as a dairy into Wylie’s second home, a huge Georgian home. That unique home which was built of stone has always been known as Old Burnside.

The stone from my home is from a quarry just outside of Almonte, but Old Burnside was lucky to have outcroppings on the 200 acre property and were utilized in and out. The dining room hearth which was originally the kitchen hearth has a base of 18 feet of rock flanked by butternut panellings. Slabs of rock were also used in the doorways. Gorgeous rooms and a foyer that has been changed many times look over a view  of the famous ‘burn’ rippling in cascades that tumbles into a cataract into the Mississippi.

Legend is there is a ghost horse on the property whose hoof beats are heard on cold dark winter nights. Folklore says that a long time ago that very horse took cover in a passage way formed by the double wall and unable to turn around. The poor horse was trapped and ended up starving himself.

By 1848 the Wylie family had outgrown itself and built a larger home next door. His eldest son James Hamilton lived in the original home with his family and then later occupied by two of his sons, John and James. In 1912 it was rented out to well known Dr.and Mrs. MacIntosh Bell. Dr. Bell was a well known geologist and improved the grounds so much the home became a local showplace.

After Dr. Bell’s death the home was sold in 1934 to the Winslow-Spraggue family and then Mr and Mrs. Howard Campbell. The house is presently for sale.

Sue Winslow-Spragge-—The woman wearing the pearls is my grandmother, Lois Sybil Winslow-Spragge. She and her husband Edward were one of the people who owned Old Burnside.  The other woman is Linda Nilson-Rogers mother–Hilda. Those silver earrings were her favourites!

Angie Arendt and her husband asks: My husband and I bought Old Burnside and are hopeful that in the coming years we will learn more of this house’s story and history. We have heard snippets and have a few old photos that we downloaded from the Almonte website. Other than that, though we don’t know much–
And gathering memories of the house from folks would be lovely! Thank you for the suggestion. We’ve heard some stories about how folks got married here or stayed here when it was a B&B. I’m hopeful we can gather up some of the older stories, too. Can you add anything?

When Mr. Peanut was once King in Lanark County!

Memories of Almonte by the Commonfolk