Jennifer Fenwick Irwin– Carleton Place and Beckwith Heritage Museum. This was December of 1916, and the only time I’ve heard of that the ice here was thick enough for skating. This photo of Horace Brown was taken the same day. He was A. Roy Brown’s younger brother and home on leave.

So not thinking with a full deck I assumed that there must have been a heck of a cold snap in the area. As I searched through the archives I found out that the west was hit hard with cold and snow.

But for the east it was just another winter with the usual comings and goings….

Then Darla Fisher Giles solved the mystery. A sweet woman named Mrs. Smith who lived on William St was employed as Mrs Johnston’s companion and told us kids of a time that you could skate on the river outside Dr. Johnston’s house. She claimed it was before the dam was reconfigured and the river froze solid in that area.

“My Father finally sent me to skate on the river. I had skates, but he wouldn’t ever let me skate on the river before. There were large kids skating right next to the Central Bridge. That was before the dam was changed.” 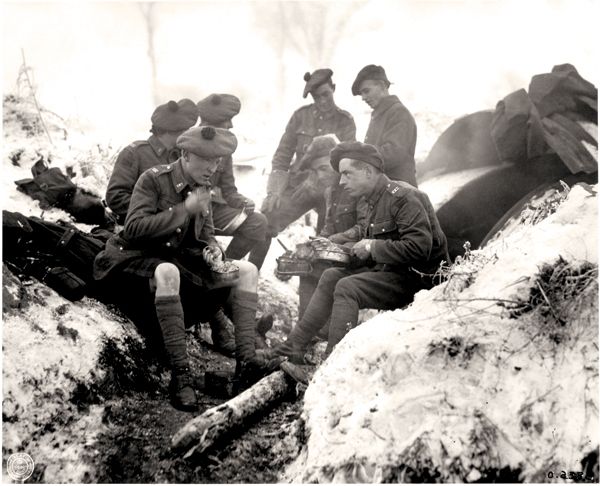 “The coldest winter was 1916-17. The winter was so cold that I felt like crying… I can remember we weren’t allowed to have a brazier because it weren’t far away from the enemy and therefore we couldn’t brew up tea. But we used to have tea sent up to us, up the communication trench. Well a communication trench can be as much as three quarters of a mile long. It used to start off in a huge dixie, two men would carry it with like a stretcher. It would start off boiling hot; by the time it got to us in the front line, there was ice on the top it was so cold.”

The winter of 1916-17 also caused a famine in Germany and is often known as the ‘Turnip Winter’. After an extremely wet autumn had ruined the potato crops and cereal production, the German population was forced to subsist on turnips in order to survive.

Killer Lightning – July 29, 1916. Lightning ignited a forest fire which burned down the towns of Cochrane and Matheson, Ontario, killing 233 people.

As the need for soldiers overseas led to a shortage of workers in Canada, many of these “Austrian” internees were released on parole to work for private companies.

The Almonte Skating Rink on “The Island”

So What Did You Wear Ice Skating?

The Figure Skaters of Carleton Place

Skaters Under Ice? Ring That Bell!

Falling Through the Ice- One Reason Indoor Rinks Were Created