The Balderson Cheese Factory dates back to 1881 and was named after the village of Balderson which was originally founded by Sergeant John Balderson of the British Army. This company was created by fifty one milk shippers who collectively decided to form a dairy co-operative and build their own cheese factory which would provide them with a reliable and local market for their milk.

The Balderson Corner’s cheese factory grew in popularity and prospered over the next decate. In 1892-93 it was one of twelve local factories that was selected to contribute in the making of the Mammoth Cheese which was Canada’s unique dairy display at the Chicago World’s Fair. The company’s development continued without any major setbacks until in 1928 the factory was destroyed by fire. Fortunately the determination of the shareholders did not falter and rebuilding started immediately. No word if Carleton Place had cheese for life after that incident. 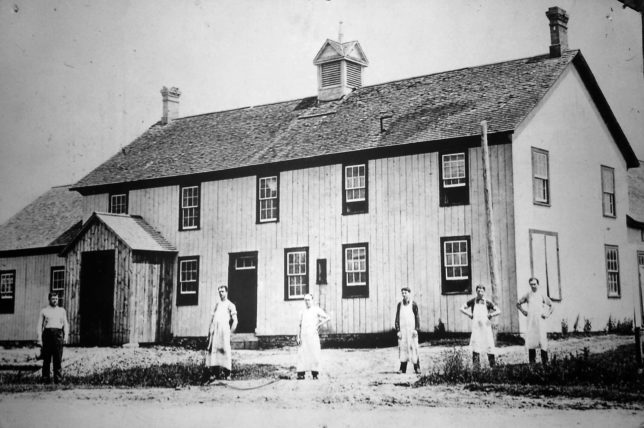 Mrs.James Balderson, sr., died at the family home, ninth line of Bathurst, onFriday, the 21st instant, at the age of 74 years.  She had been ill for over three months.  Deceased was born on the third concession of Bathurst, her maiden name being Mary Noonan, daughter of the late James Noonan,one of the prominent men of his day in this district.

Her marriage took place on May 26th, 1858, and had she lived a week longer, her married life would have spanned fifty-one years.  She settled with her husband on the ninth line, and there they lived for over half a century in peace and prosperity.   She is survived by her husband and the following family: James, in Bathurst; Miss Hannah, Toronto;William at home; Miss Annie, New York; Geo. Formerly of COURIER, now in San Francisco; Tom, in Bathurst; and Robert, teacher at Harper.

James and D.R. Noonan, town are brothers,and Mrs. O’Neil, Oswego, and Mrs. Lee, of Buffalo, are sisters.  Here is the first death in the family since the celebration of the golden wedding of Mr. and Mrs. James Noonan last winter at which she was present.  The funeral took place on Sunday afternoon to St. John’s church, thence to the parish cemetery. (28 May 1909 pg 4)

Balderson in 1905 boasted few trees along the dirt road which was the main road to Perth. In the top photo from the left: the original Balderson cheese factory erected in 1881, the Noonan Blacksmith Shop, Cowie home, Anglican Church and rectory. From the right: the Noonan home, Jone’s Store, Haley property (1962), J.M. McGregor property, J.C. McGregor barn and home. Balderson at one time was known as Clarksville.– Perth Remembered

When the Cheese Crashed Through the Floor