Primitive Stoneware Bottles of Canada Photo–Other bottles in his collection are marked “JL” which, he says, stands for James Laurie and later Jane Laurie, his wife. James Laurie was a baker, confectioner and later lunchroom owner from 1858 to 1925. 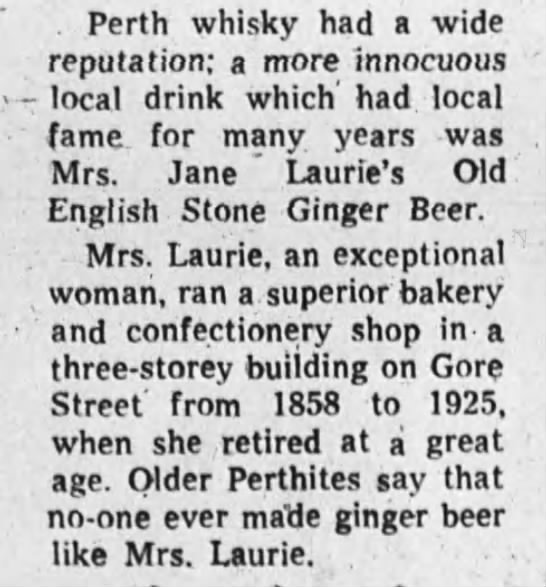 September 1925 Perth Courier – MRS. JANE LAURIE retired from business.  Laurie’s Ginger Beer, in the stone bottles, was once one of Perth’s popular drinks.  Mrs. Laurie passed away in a few months after retiring. 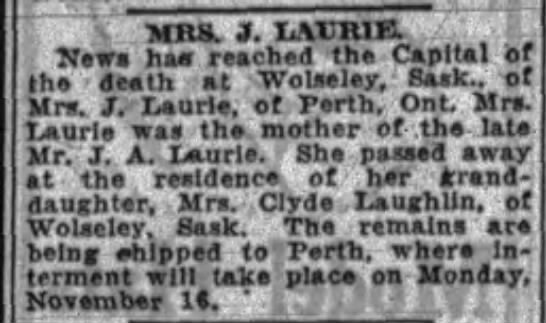 The 1871 federal census lists James Laurie, a 33 year old baker, born in Ontario, of Scottish descent. Upon James’ death, it appears that his widow Jane assumed the proprietorship of the business.”Mrs. Jane Laurie’s Bakery and Confectionery was located on Gore Street in Perth. The three-storey white brick building was erected in 1886 as a store with residence above.

Baking and candy making were done in the basement, where the bake ovens were situated. The store was elegantly furnished with mahogany shelving and counters, topped with solid walnut. Adjoining the store was a neat restaurant in which oysters, ice cream and fruit were served in season, together with bread, cakes and pastry.

A favourite lunch consisted of buns and chunks of local cheese, with a bottle of Mrs. Laurie’s Old English Ginger Beer. The Laurie business was established in 1858 and was operated by Mrs. Jane Laurie and her daughter, Mrs. Margaret MacCormack, for 67 years. Following her daughter’s sudden death in 1925, Mrs. Laurie sold the business. She died later that same year, on November 11, 1925 at the age of 90 years.-Primitive Stoneware Bottles of Canada

The buildings in town record the name of many of the major retailers … Shaw, James Brothers, Code … but what must have been one of Perth’s unique stores is not even recognized with a plaque.

Jane Laurie opened “Mrs. Laurie’s Bakery and Confectionery” in 1858. She would soon bring her daughter into the business and it would remain open for 67 years until 1925 when she sold the business. Jane was still in the store working in her 90th year.

The stories she must have witnessed, the history that passed by the door to her shop: the wide-eyed, nose-pressed-to-the-window children who one year were buying penny candy and who went on to do great things for Perth and Canada.

This would be a special story and a unique window on our heritage.

Cake By the Mississippi — The Bowland Bakery

Remembering the Smells of Heaven on Earth —Davidson’s Bakery